Alison and K-Zar Emmanuel ride in memory of Mike 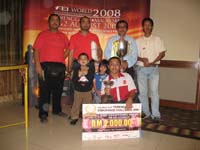 Nik Sabarudin Bin Daud, riding the stallion AS Shiffa Kassan finished first in the 2006 Sultan's Cup 160km CEI*** event in Malaysia! AS Shiffa Kassan was also awarded Best Condition in a race which started at 5pm on Saturday, finishing Sunday Morning with a ride time of 12:38:43! International Certificate of Capability were obtained by the first three finishers of the 160km event.

The races were well attended, with 22 starters in the 160km with 12 finishers. This very high 57% completion rate, in very tropical conditions, was a happy result for all involved in this first running of the Sultan's Cup event.

More information with images and comentary may be found on Endurance.Net
Full Event Coverage
Posted by Endurance.Net at 11:05 PM No comments:

Posted by Endurance.Net at 9:29 PM No comments:

The FEI Bureau held its statutory meeting on 17 November in Dubai (UAE).

ENDURANCE
The FEI Endurance Committee held its meeting in Dusseldorf (GER), on 23 August 2006. The following items are brought to the attention of the Bureau for information and approval:

2008 World Endurance Championships - Malaysia
In view of the 2008 World Endurance Championship, a trial event would take on 24 November 2006 at Terengganu (MAS). The Officials to act on that occasion were approved. Each official would produce a detailed report on the viability of the event taking into account climatic factors. The OC had agreed to provide detailed weather reports over a period of months to provide information for both this event and in view of the 2008 Olympic Games in Hong Kong. Minimum requirements to consider the trial run a success was the achievement of a 40% completion rate within a maximum ride time of 16 hours.

Course Directors/Courses
Derek Liebenberg (RSA) was appointed as the approved Endurance Course Director for Southern Africa. A number of FEI-funded courses would take place in Eastern Europe in 2007. This region, which has seen a growth in the discipline in the last 24 months, should be supported in terms of education rather than funding.

World Endurance Seminar
A seminar to discuss the future of the discipline would take place in 2007, venue and exact dates TBC. It has emphasised that it would not have any decision-making role .

The corrections and additions to the FEI Rules for Endurance (6th edition) were approved.

Medication Control Programme Update
As per 8 October 2006, 1650 horses had been tested, which is a significant increase as compared to previous years. From these 1650 horses, 45 (2.7%) positive test results were reported to the FEI. For the record, 1250 horses had been tested in the Medication Control Programme as per October 2004 and 69 positive medication cases had been reported (4.6%). As in previous years, most positive test results relate to medication used for problems in the locomotion system of the horse.

Medication Advisory Group (MAG) Update
The Â‘Medicine BoxÂ’ concept had been well accepted. There were 16 substances in the Â‘BoxÂ’ and the intention was to provide reliable detection times for each of these agents. Work on a number of other substances was ongoing. It was hoped to publish Detection Times on eight further substances before the end of 2006.However, that depended on the goodwill and commitment of laboratories and others bodies outside the control of the FEI so the targets could not be guaranteed. Detection times on a sedative and a local anaesthetic were to be added before the end of November.

Work continued on developing agreed laboratory standards. As for testing in Latin America, applications for the status of Reference Laboratory had been received from three laboratories. The bids were being considered and a follow-up would be made shortly.

CALENDAR
The 2007 calendar of FEI International Events was approved.

AFFILIATIONS
Albanian Federation of Equestrian Sports was approved as full member (Group I)..

GENERAL ASSEMBLY
The current General Assembly format is being reviewed in order to take full advantage of the General Assembly week and keep it interesting and dynamic. Innovations will be introduced in view of 2007. Detailed information will be sent to the National Federations at the end of the year.

www.horsesport.org
Posted by Steph at 7:07 PM No comments:

Madiya pleased with strides made in health for UAE women

Malaysia: Riders out to defy the odds

A question is always a good place to start. As it so happened, someone on Ridecamp asked a very good question regarding a topic that is near and dear to each of us – just what were 'endurance' bloodlines?

When the question was asked, the 2006 World Equestrian Games were just around the corner. I thought – what better forum in which to prove what 'endurance' bloodlines might be – than to examine the top ten finishers of the top endurance horses in the World.

An examination of the top ten finishers, as found below, is a compilation of information which is contained on a wonderful French website called “Endurance & Pedigrees”. This site is a wealth of information regarding bloodlines, competitions, stallions, photographs and about anything to do with endurance, in France. I found that this website also listed every one of the WEG horses, so the scope seemed fairly broad, to more than just France.

Here is how the top ten Endurance horses, in the World, are bred:

1ST – GOLD - HUNGARES (ESP) – 8yo, Purebred Shagya gelding. He was bred by Babolna National Studfarm in Hungary, and imported to Spain specifically to compete in Endurance. His name at Babolna was Siglavy Bagdady VIII-1. His sire is Lm. Siglavy Badgady– 308, and is out of a Farag ox granddaughter. On the bottom of his sires’ side is the “Century Stallion” Gazal VII. His dam is sired by O’Bajan XX (Pamino) and is out of a Mustafa daughter. He shows an established endurance record since 2005. The bottom side of this pedigree shows Shagyas and Purebred Arabians from both Janow Podlaski and Babolna. The top side of him pedigree shows Shagyas predominantly from Babolna, with the Arabians from El Zahraa.

3RD – BRONZE - SANGHO’ LIMOUSIAN (FRA) – 16yo, PB Arab G – Sired by Fakir de Domenjoi (by Fawzan** (by Tuhotmos)), out of Safira (Moulouki** X Gmayra) – Sangho has and established endurance record since 2000. Fakir de Domenjoi is ranked 12th on the list of French stallions siring 5 or more endurance offspring. He has sired 8 offspring, out of 8 different mares, and they have attempted 34 different rides with a completion rate of 61.76%.

4TH – ELVIS HB (ESP) – 8yo, PB Arab G – Sired by Ef Boss (Ponamarev (By Salon) out of Shaklan daughter). Dam is sired by He Ibn Faoniet. He has and established endurance record since 2004. Currently this is the only endurance product of this stallion.

5TH – AKIM DU BOULVE (FRA) – 8yo, PB Arab G – Sired by Said Lotois (by Zulus**) out of Shaker el Masri granddaughter. He has established a successful endurance record since 2005. This horse is ranked 37th on the French stallion endurance sire of 5 or more endurance offspring. Said Lotois sired 16 foals, from 15 different mares, they attempted 76 rides, with a completion rate of 60.53%.

8TH – HIFRANE DU BARTHAS (FRA) – BEST CONDITION - 11yo, ½ Arab M – Sired by Bosphore** (Djouran X Bossa Nova). She has an established endurance record since 2002. Her sire, Bosphore ranks 12th on the list of French stallions siring more than 20 endurance offspring. He sired 31 offspring out of 28 different mares. They attempted 120 rides, with a 43.33% completion rate. There is some very old desert blood in this horse!


9TH – SHAR RUSHKIN (BRN) – 11yo, bred by Sharon Scott of the Shar Arab Stud in South Africa. He is a pure-bred registered Arabian. He is by the Russian stallion Nepokorny and out of Fanmar Ramba, a mare of mainly crabbet breeding.


10TH – ZIALKA** (SUI) – 14yo, PB Arab M – Sired by Persik** and out of Brazilia. Brazilia is sired by Mashuk (who is sired by Aswan, and is out of a Salon daughter). Brazilia’s dam is Mechta, who is sired by Arax and is out of the Priboj daughter, Metropolia. Persik is one of the top Endurance sires in France and is a grandson of both Korej and Arax. She has an established endurance record since 2002. Persik is ranked 3rd on the list of French stallions siring 20 or more endurance offspring. He sired 91 offspring, out of 55 different mares. They attempted 339 rides with a completion rate of 50.13%.

Posted by Endurance.Net at 10:14 PM No comments:

Kathy Brunjes (Endurance) Elected to USEF Board of Directors

Kathy Brunjes has been elected to the USEF Board of Directors to represent the Endurance Discipline. The election is for the next 2 year period.
Posted by Endurance.Net at 4:25 PM No comments:

Posted by Endurance.Net at 10:08 PM No comments: