With the wave of Endurance 101 clinics gaining momentum among AERC volunteers with the goal of attracting new members and to help ‘newbie’ riders move up in distance, AERC.org has created an “Endurance Clinics” page on its website. The page lists upcoming Endurance clinics, and gives information on holding Endurance Clinics for the beginner to more experienced riders who seek mentorship.

“Endurance 101” is mainly for ‘newbies’ to endurance; “Endurance 201” clinics are more hands-on, and often have mounted demos with a mock endurance ride and vet check. “Beyond the Basics” clinics are “to help riders get through the ‘sophomore slump,’” this who want to increase their level of performance in the sport.

AERC promo materials, and PowerPoint modules are available for those putting on endurance clinics.

Posted by Endurance.Net at 9:25 AM No comments:

Time to Renew your AERC Membership for 2015

RENEW for 2015! You are welcome to renew online or by phone (866-271-2372). There are changes to the rule book, so 2015 membership cards will be mailed with rule books by late October. Ask about our 2-year membership, available only to those who call the office to renew.

The withdrawal practices are the result of rule changes passed at the USEF Annual Meeting in January 2014.

Additionally, for the 2015 competition year, the USEF has created an online medication report form for therapeutic administration of forbidden substances, which is available online.

For more information about the USEF Drugs and Medications Program, visit https://www.usef.org/_IFrames/Drugs/Default.aspx.
Posted by Endurance.Net at 9:05 AM No comments:

DIRECTOR-AT-LARGE election results are in: In alphabetical order, here are the directors who will be sworn in (or re-sworn in) at the 2015 AERC convention: Tom Bache, Olin Balch DVM, Randy Eiland, Susan Garlinghouse DVM, Terry Woolley Howe, Mollie Krumlaw-Smith, Mike Maul, Christoph Schork.
Posted by Endurance.Net at 9:30 AM No comments:

It’s the dream of every serious competitor: to be in an international arena representing the United States.
Holly Corcoran of Effort has carried that dream for the past nine years in equestrian endurance riding and got a taste of it recently when she returned from Brazil after participating in a 100-mile (160-kilometer) endurance race on a provided horse. She has five Arabian breeds of her own at home, the overwhelming horse of choice in this brand of competition.

With the season’s reversed and countries south of the equator in the thick of the summer season, Corcoran opted out of the race before her horse could have with a serious case of dehydration. Veterinarians are on site at stages during endurance riding competitions to see if the animals are fit to go on in the one-day event.

A certified public accountant by profession, Corcoran shared her stories at the weekly Wednesday meeting of the Kiwanis Club of the Stroudsburgs, and feels she and her horses are ready for a chance at the big international stage for the first time when they participate in qualifiers for one of the five spots (and one alternate) on the American team in the Pan American Endurance Games that take place in Toronto next August. Those selections will be determined in endurance trials at Biltmore Estates in Asheville, North Carolina in May...

Endurance Day on Horses In The Morning with Karen Chaton

Horses in the Morning - Listen!

Endurance Day with Karen Chaton opens with several helpful hints for riding in cold wet weather. Next up we hear the heart warming story of two gals who got to be friends through their shared love of endurance riding and now share something truly amazing. Rounding out the show Susie Schomburg goes over the latest AERC rule changes. Listen in...

Horses in the Morning Radio show
Posted by Endurance.Net at 7:31 AM No comments:

(01-December-14 – AURORA, CO) – Arabian horses are known for their endurance, their beauty, and their ability to be versatile and strong. The Arabian Distance horse is no different and the Arabian Horse Association's (AHA) Distance Horse of the Year award recognizes these attributes and the significant accomplishments of an Arabian, Half-Arabian or Anglo-Arabian horse in the distance sports each year. This year, with an impressive field of nominees, only one could be selected and the honor of this prestigious award was given to GF Brazils Envy.

Distance is the name and high mileage is this horse's game. Owned and ridden by Ann Kratochvil of Ridgecrest, Calif., GF Brazils Envy has been competing in American Endurance Ride Conference (AERC) rides for nine years. Kratochvil is an accomplished rider herself, logging over 23,000 endurance miles, but considers Envy to be the best horse she has ever owned.

While high mileage is important for this award recipient, Envy has other monumental accolades. Having received 12 first place finishes, 105 Top Ten awards and 15 best Condition Awards, Envy has shown that she is not only fit and fast, but also a horse with a huge heart. Owner Ann Kratochvil and Carla Richardson believe these were just some of the many reasons Envy was deserving of the nomination and win.

AHA would like to congratulate GF Brazils Envy on her many accomplishments and her winning of this coveted award.

AHA would like to congratulate all of the 2014 Distance Horse of the Year Award nominees: Amigo Rissar+, Awesomes Fire N Ice, Belesema Finalia, Cashin In, Davanna Tom Cat, MMF Thunders Echo+/, Sea Dragon, Sizedoesntmatter and Wyntez Buddy. Each of these horses were deserving nominees and AHA wishes them luck in 2015.

Posted by Endurance.Net at 7:54 AM No comments: 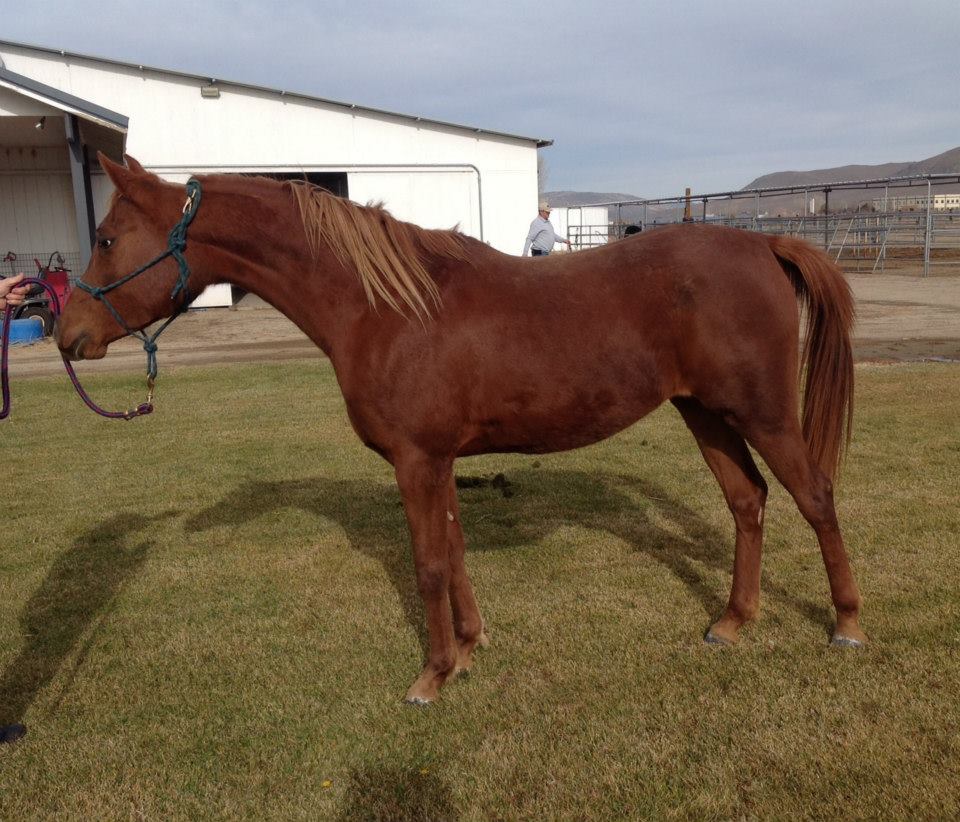 The Nevada All-State Trail Riders are pleased to announce the 2015 NASTR Trails Fundraiser Auction featuring TR My Surprise. This beautiful 2012 Arabian filly has been donated by Terryl A Reed. Thank you Terryl for you generosity and support of equestrian trails.
TR MY SURPRISE- AHR*663030 is sired by COWBBOY BOB x HR AFLAME. COWBBOY BOB is the 2014 Virginia City 100 Mile Ride Best Condition winner. Dam is BOLD ROSE, a SANSKRIT daughter. BOLD ROSE is also the dam of TR MAVERIC who was the 2009 Virginia City 100 mile ride winner, TR JACKPOT, and TR JJAG, successful endurance horses.

Final bids will be taken at the Nevada Derby 50 mile AERC ride held on April 4, 2015, where SURPRISE will be on site. Watch for more photos and details about the NASTR Fundraiser Auction.

For more information, see
http://nastr.org/
Posted by Endurance.Net at 12:07 PM No comments: 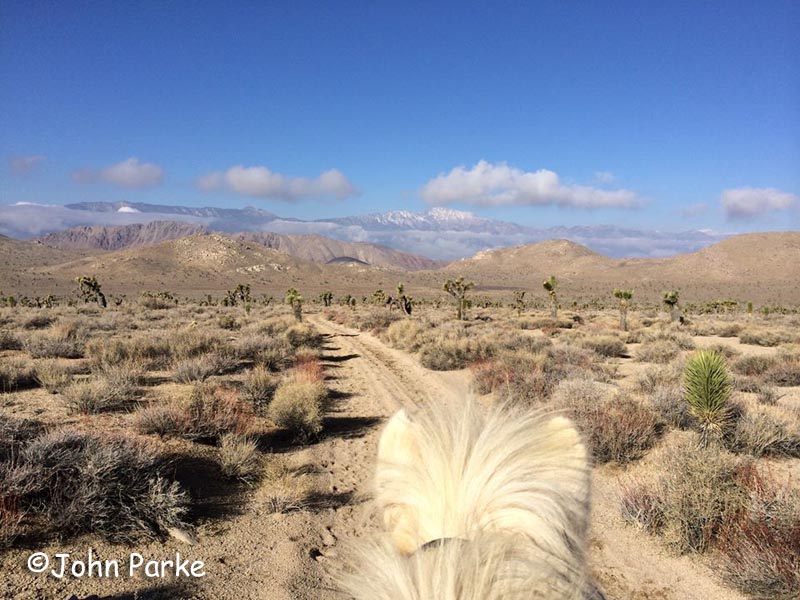 John Parke and his 2013 AERC Hall of Fame horse Remington became AERC’s only Double Decade team when they completed the Death Valley Warmup 50-mile ride on December 6, having completed a 50 mile ride for twenty years in a row.

“This was a beautiful ride in the high desert through the Joshua Trees with a view of snow capped Olancha Peak in the Sierras,” Parke said. “We finished under the full moon. It was a good day.”
Posted by Endurance.Net at 10:25 AM 1 comment:

Being new to the job of President of the Western States Trail Foundation, I am just trying to get my foot up in the stirrup. WSTF has much to do each year, and this year is no different.  Besides putting on that little event called Tevis, a few of the WSTF projects include working with the American River Conservancy to protect 10,000 acres for recreational use just west of the Granite Chief Wilderness Area, working with the USFS to continue the development of the Chickenhawk trail head, continually maintaining the WSTF trail, and many other projects. All of this is after the work WSTF did in conjunction with other groups reconstructing the Swinging Bridge that was destroyed in the American Fire in 2013.

My success as president will be largely due to the hard work of the members of the Board of Governors.  Already this new fiscal year, planning and work has begun or continues on the projects I just mentioned. There are also many volunteers that work continuously on these projects who are not on the Board of Governors. I would like to introduce the new officers for the WSTF for 2014-15; Barbara White and Steve Hallmark as Vice Presidents, Shellie Hatfield as Treasurer, and Debby Lyon as Secretary. We'd also like to welcome Carrie Ellinwood to the Board of Governors this year.

I am honored to be President of the WSTF and will do what I can to continue the legacy of what we call Tevis.

He calls the nearly 3,000 mile ride "The Long Trail Home" and made the journey to raise awareness for veterans that are suffering from PTSD.

“I didn’t really want to do this ride; however, I woke up one day and knew that I just had to do it. We’re losing 22 of our brothers and sisters every day and I was almost one of them," said Littrell. "I am doing this for them.”

Littrell started with his horse’s hoofs in the Atlantic Ocean and 2,800 miles later finished with them in the Pacific Ocean. He started on May 1 and rode 20 miles a day until completing the journey on November 30.

Littrell is an Elbert, Colorado native and served as an infantryman with Golf Co., 2nd Battalion, 5th Marine Regiment from 2001 to 2005.

Destiny was in “Beast Mode!” Hall said. “Beast Mode is right!!” said daughter Carolyn Meier, who rode with her mom Hall. “At 17 with 7,000 miles he was jigging coming into the finish!”

Destiny also reached a major milestone this year in becoming only the 5th horse to get his 1000-mile buckle in the Virginia City 100. That was also Destiny’s 20th 100-mile ride completion.

For a story on Fire Mt Destiny and Gina Hall before this year’s Virginia City 100, see
http://merritravels.endurance.net/2014/04/destination-virginia-city-100-gina-hall.html

Posted by Endurance.Net at 2:18 PM No comments:

Put a fork in it, we're done! The Swinging Bridge is finally back in business! The bridge, which spans the North Fork of the Middle Fork of the American River at the base of the Devil's Thumb climb, has been restored and brought back from the ashes following the 2013 American Fire. This was accomplished jointly with USFS employees and WStrail.org volunteers. The USFS did a stellar job in getting the bridge done exactly one year after the American Fire was contained.

Posted by Endurance.Net at 9:02 AM No comments: