It is with an extremely heavy heart that I am posting this. My very much loved Atlas (Greenbriar Al Jabal) fractured his pastern, actually shattered it, playing on a frosty morning last week.

He has been with me since before he was born, my best friend, plus was an exceptional endurance horse, always wondering what adventure the next mile would bring us.

I will miss my big white horse very much and hope that you all could experience a horse with our connection at least once in your life, it is a treasure. Posted by Endurance.Net at 9:01 AM No comments: Awarded to the horse and rider team who have accomplished 10 years of completions in AERC rides of 50 miles or longer, Lindsay Fisher and Monk achieved this award in the October Camp Far West 50.

"Monk and I have crossed the finish line of every single AERC ride we’ve tackled (pulled at the finish of one 100 miler). This horse also won many other rides with other riders year after year.

"He carried my 5 year old daughter on her very first trail ride.

"MONK....he will forever be greatness and have his own special place in my heart!" Posted by Endurance.Net at 10:22 AM No comments:

1966 Flashback: The Cup at the End of the Mountain Trail

The horses and their improbable riders gathered at Tahoe City, Calif. for the yearly Tevis Cup race across the winding paths and hazardous streams of the Sierra to Auburn, 100 miles away

What the Boston Marathon is to the distance runner, the Western States 100-mile, one-day ride for the Tevis Cup is to the endurance horseman. And, like the marathon, the California race over the rugged Sierra from Tahoe City to Auburn attracts some improbable but wonderful people. Among the 92 riders who started this year, there were a couple on their honeymoon, a 12-year-old girl, a 72-year-old man who had put off a hernia operation in order to compete, an Indian ranch hand, some polo players, a woman believed to be a Cherokee princess, an assortment of mothers, secretaries, factory workers and businessmen and a man with a gray vandyke beard who was described as a retired capitalist.

The stallions, mares and geldings entered were just as surprisingly diverse, and included just about everything found in a horse encyclopedia: Arabians, Anglo-Arabians, a Peruvian Paso, quarter horses, Appaloosas, Thoroughbreds, Standardbreds, Morgans pure and crossed with all the others, Pintos, buckskins, palominos and even a plain old western mustang...

Read more here:
https://vault.si.com/vault/1966/09/26/the-cup-at-the-end-of-the-mountain-trail?fbclid=IwAR3vrI-p2Gyi4GpBQyhxoHWFo8eqWFfYaavkNHbALxFb9Dafu3zIidpeHyw
Posted by Endurance.Net at 10:13 AM No comments:

2021 December's Horses in the Morning Podcast

Endurance: Karen Chaton on the Hot Seat for Dec. 14, 2021 by Horseware

Karen Chaton, usually the host, becomes the guest on this Endurance episode. She was recently interviewed on the Stall and Stable podcast and we wanted to share it with you. Listen in...

Posted by Endurance.Net at 9:00 AM No comments: Owned by Dr Claire Godwin
an amazing gelding with 6030 miles, 18 100-mile finishes including the Tevis Cup (his 5th buckle) at 27 years of age.
Becky Pearman photos

Posted by Endurance.Net at 8:56 AM No comments: Linda Sherrill of Justus Photography based in Alamogordo, New Mexico, has been a member of the PPA (Professional Photographers of America) since 2014. PPA is a group of around 25,000 photographers in the US, Mexico, and Canada.

The organization holds two international print competitions each year. Linda entered three of her images in this year’s September event in Atlanta. Out of 5901 entries, only 1040 received Image Excellence awards, and around 2000 were merited. Two of Linda’s images, ‘Another Day at the Office’ and ‘Spring Branding’ merited, and ‘Ride and Slide’ won an Image Excellence award. “That one was judged by 10 judges, and it was a unanimous IE award,” Linda says.

“There are 12 different criteria that are their judging points, and those have to be adhered to. For example, you have to see direction of light, and the title that you give it gets judged - the impact that it has on the judges when they open their computer screen and look at it for the first time.

“The judges only have 60 seconds to judge the images. They know exactly to look for.”

Linda is two merits short of becoming a ‘Master Photographer’ in the Photographic Open category. To become a Master of Photography, a member needs 26 merits. Thirteen have to be in competition, and the other 13 have to be in service which qualifies as attending education, taking classes such as photography technique, Photoshop, or basics of starting a photo business. It’s a fierce competition to just get into some of the classes.

“The MP certification proves that you have invested time and money in education, and obviously it’s important to you, and then you also took that and translated it into images that would win in competition.”

Master Photographers can teach on whatever their expertise is, so Linda will soon be able to teach classes on photographing horses and dogs and the people who love them.

“PPA does some wonderful things. They’re there to support us. We have an annual national convention, coming up in January in Washington DC, and all of my images will hang in the gallery there, as well as everybody else’s that merited or got an image of excellence award.

“This year was special, I’ve never done this well in competition in one year before. It just makes your client pictures so much better. Trying to comply with competition rules really ups your game.”

Just recently, ‘Ride and Slide’ was also nominated for a GIA (Grand Imaging Award) which is the highest award PPA bestows. That judging will take place next month during the PPA Annual convention in DC.

“PPA is the premiere educational place to go when you want to learn about photography. It’s a very supportive group. The classes teach me how to make my client images better. I can’t tell you how much my career has gotten better by print competition.”

Linda started photographing Arabian horses at a horse show for a friend in 1992. After that, she was hooked. She started shooting Endurance rides in the midwest in 1996, and is a member of the Endurance Ride Photographers Guild. This is a group of around two dozen professional photographers from around the USA dedicated to documenting AERC Endurance ride events in the USA.

“Shooting Endurance rides is a lot of fun. I don’t compete anymore, but getting out there with a camera and watching the riders go by is still huge to me, because it’s really about the people - your friends, and the friends that you make.”

See more on Linda at:
http://www.endurance.net/advertisers/EnduranceRidePhotographersGuild/LindaSherrill.html 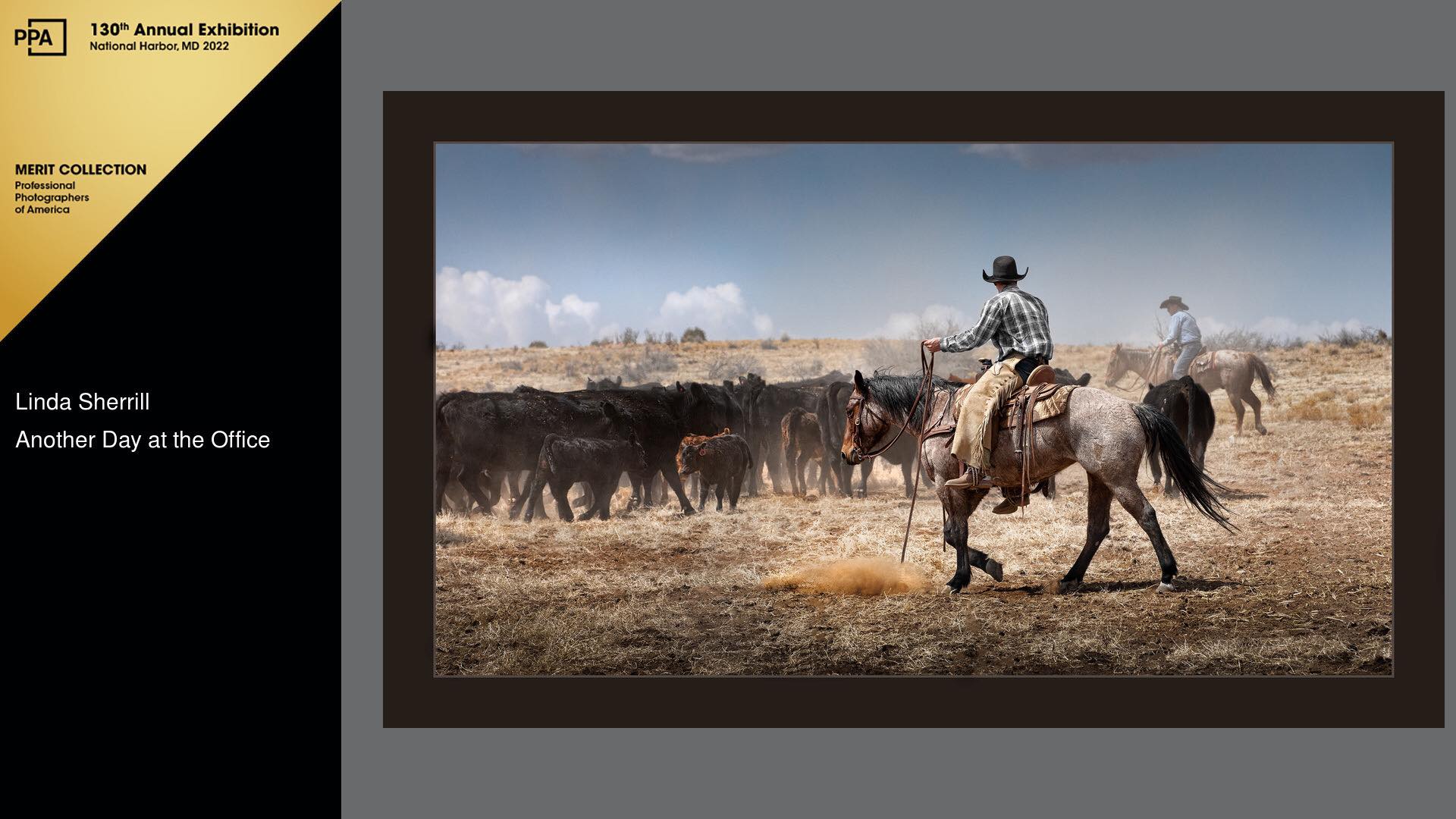 Posted by Endurance.Net at 8:31 AM No comments:

The Tevis Cup: A 100-Mile Endurance Ride Like No Other 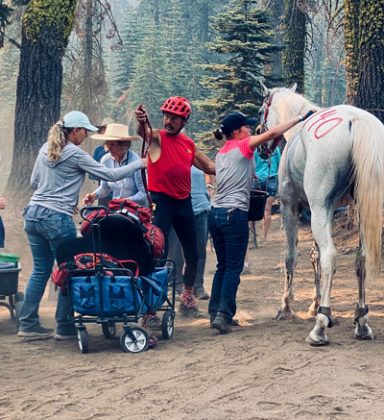 Preparing for a 100-mile horse ride is no small feat. I’ve trekked across Mongolia as an official for an endurance horse race, but that seems like a warm-up for The Tevis Cup, which spans across the Sierra Nevada mountains in Northern California. This is a true test of horse-and-rider athleticism and mental endurance. Recently, I attended my first Tevis, also known as the Western States Trail Ride, as a crew member for a friend’s first attempt.

Held annually during a full moon in late July or early August since 1955, the longest North American trail ride starts at Robie Park in Truckee, Calif., and runs 24 hours over mountains and through canyons to finish at McCann Stadium in Auburn.

The trail winds through canyons and a popular Western States Trail, which travels through a few small towns. For example, the town of Forest Hill, which is a one-hour hold, is lined with volunteers, crew, and the locals all cheering on riders as they pass through the neighborhoods on their journey. The annual event is celebrated, and it is hard work to coordinate 100 miles of public and private lands for this adventure...

Read more at:
https://www.horseillustrated.com/the-tevis-cup-a-100-mile-endurance-ride-like-no-other
Posted by Endurance.Net at 9:03 AM No comments: