The Arabian Horse Association has announced a tentative schedule for the October 5-9 Distance Horse National Championships, AERC Open rides and AHA Open CTR which will be held at the Teeter Ranch in Oreana, Idaho.

For details of the schedule, and for more information on the ride, see:
http://www.endurance.net/international/USA/2017AHAOwyheeCanyonlands/

Posted by Endurance.Net at 7:09 AM No comments:

Bill Hinkebein and his granddaughters Josie and Jessica Reeter all won open level championship ribbons for the NATRC 2016 ride season.

This adventure began in 2015 when the granddaughters of Bill and Jeanne Hinkebein rode in the novice division, with Bill riding Competitive Pleasure. With their granddad, Josie, 14, and Jessie, 11, rode registered Missouri Fox Trotters born, raised and trained at the Hinkebein’s Indian Creek Equine Center northwest of Chillicothe, Missouri – Jessie on Shady Sunset WH, Josie on Country Mocha WH, and Grandpa on Roho Honoy Mocha WH. Grandma Jeanne had meals ready and helped when needed with hauling the three horses.

Posted by Endurance.Net at 7:24 AM No comments:

2017 June's Endurance Horses in the Morning Jun 13, 2017
On today’s show Karen explains Cardiac Recovery Index and why its important, Dr. Mero explains the AERC Microchip program and Phyllis Keller has an update on her Pacific Coast Trail ride. Listen in...

Posted by Endurance.Net at 7:43 AM No comments:

Lorna has endurance in her blood with a family history of distance riding even before she officially started the sport. She just turned a frisky 61 and has been down many trails with her mare Alley-Bugs, a former rescue horse. She and Alley-Bugs started their endurance career in 2008 and, after a few initial hurdles, have been going strong ever since. The team just won and received Best Condition at the Klickitat Trek 75 this month. This team is ready to hit the Tevis trail.

An anonymous donor stepped forward earlier this year with an idea to sponsor an entry for someone who had a dream to ride Tevis but the years got away from them. The essay contest was limited to people that had never ridden the Tevis Cup ride before, who would be qualified to enter the Ride as of May 1st and they had to be at least 60 years of age...

Posted by Endurance.Net at 7:55 AM No comments:

The 2017 Tevis is going to start at the sheep pens in Van Norden Meadows, Soda Springs. The snow conditions today, June 1, dictate that we relocate the start to Soda Springs. Snow levels through the Granite Chief Wilderness will not provide WSTF enough time to have the Squaw Valley trail ready for our August 5th start. Not since 1983 have the snow conditions required us to put an alternate high country trail into service.

This year's start will travel south out of the Van Noreen meadow about five miles before entering Soda Springs Road and continuing to Road 51 which takes riders up to Lyon Ridge. At that point we will travel the traditional Tevis trail all the way to Francisco's vet check.

There is still uncertainty as to whether or not the Poverty Bar river crossing will be shallow enough to provide safe passage, as the snow melt has the river running at high levels. At this date, we are not able to make a definitive decision on the lower trail.

We have two options after Francisco’s. One is to make the crossing at Poverty Bar and using the old trail through the “upper” quarry to pointed rocks before crossing No Hands Bridge. The second choice, if we cannot cross the river, is to go up Drivers Flat Road, cross Foresthill Divide Road, and take the Clementine Trail. Riders would come down to the confluence, cross the Highway 49 Bridge, then pick up No Hands Bridge and travel on to the finish.

Riders are cautioned not to preride the Clementine Trail as parts of that trail are open to mountain bikers and hikers ONLY. Tevis riders will have the trail open to them and closed to bikes on the evening of August 5. Should we have to use the Clementine Trail, it will be a first for the Tevis in our 63 years of history.

We will keep everyone posted as we make the decision on the lower trail. We guarantee a trail that will include as much as the original trail as possible and the entire trail will offer an experience up to the standards expected of the Tevis.

Posted by Endurance.Net at 7:41 AM No comments: 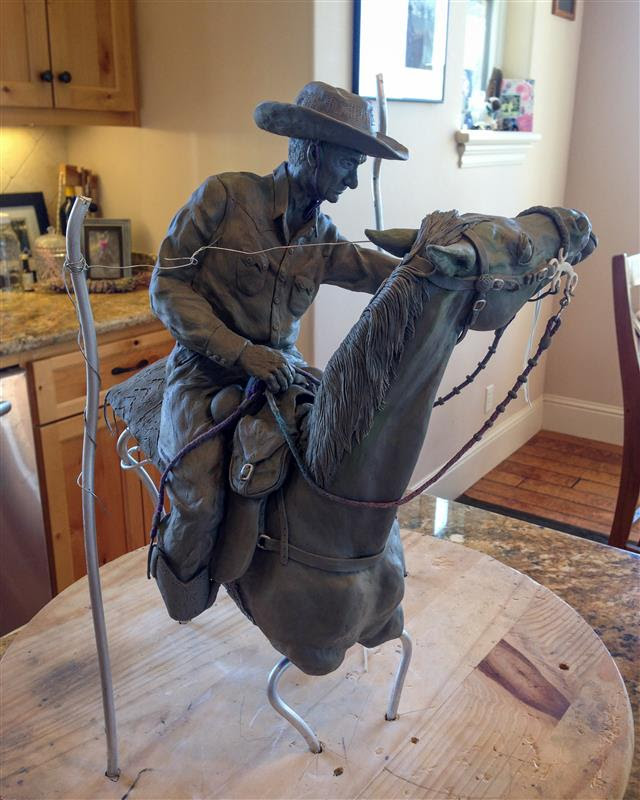 A sneak peek at the pre-foundry bronze piece, courtesy the artist Diana Hiiesalu.

The Western States Trail Foundation Board of Governors voted at their January meeting to introduce a new trophy to the awards already given. In honor of our founder, it will be called the Wendell Robie Trophy.


The Robie Trophy will be awarded to all horses that have successfully completed at least five Tevis Cup rides.


The initial presentation of the Robie Trophy will be at the 2017 Awards Banquet. All horses who have previously - in the history of the ride - completed at least five times, to include horses that finish their fifth ride this year, will be recognized at that time.


The Board of Governors felt, given the difficulty of finishing a single ride, it would be appropriate to recognize the endurance and longevity of horses that have completed five or more rides.


The trophy itself is being created by talented sculptor, Diana Hiiesalu. Diana is capturing the iconic image of Wendell Robie giving his horse a drink from his water bottle.

In addition to recognition on the trophy, award recipients will also be given a medallion reflecting the same image.


In order to compile the names of Robie Trophy horses from the past, the board requests that riders and friends of the ride please report any qualified horses to Debby Lyon at debbyly@aol.com.


Also, any riders who will be riding a horse which will be attempting a fifth completion this year, please alert Debby.

Posted by Endurance.Net at 7:42 AM No comments: