Endurance Rider and author Lori Oleson shares about how she got into horses and her 2021 Tevis completion with her horse, Fargo. This was Lori’s fourth Tevis completion and Fargo’s first 100 ride. Lori and Fargo finished 27th overall in the 2021 Tevis. Lori has a lifelong love for horses and has logged over 14,000 miles in competition.

Lori is the author of:
Endurance Years Gone By

and also author of:
Enduring Memories

Lori's books can be found by shopping for them on Amazon.

Listen to the podcast: https://endurancehorsepodcast.podbean.com/e/lori-oleson-tevis-2021/
Posted by Endurance.Net at 10:23 AM No comments:

Claire Eckard's Young Adult book Gallant: The Call of the Trail was the Young Adult Overall Winner from the EQUUS Film & Arts Festival.

The EQUUS Film & Arts Festival is the world’s premier showcase for domestic and International Equestrian Content feature films, documentaries, shorts, music videos, commercials, training and educational materials, art and literature. The EQUUS Film Festival hosts an annual award event to highlight and reward the diverse and creative efforts of those in indie film, music, and advertising, who artistically pay homage to the horse through media.

Gallant: The Call of the Trail brings the sport of Endurance riding to forefront, telling a tale of an unbreakable bond between human and horse.

It is a gripping journey of a young girl and a foal who are raised together in The Valley of Hearts Delight. Gallant and Gracie have a special bond, rarely seen between a human and a horse. Separated by a bad accident when Gallant is five, each gets a second chance of happiness pursuing the long-distance sport of endurance riding, neither knowing they are leading parallel lives. Will Fate bring them together again? Gallant’s arch nemesis, The Almighty Flash, threatens to destroy all that Gallant has worked for. His misguided ambition and greed, developed at the hands of an abusive owner, has created a darkness in his soul that turns to blind fury when his endurance career is threatened.

Gallant: The Call of the Trail was inspired by Eckard’s dear friend — a 97-year-old author of books about endurance riding and one of the first individuals to help create and shape the sport in the U.S.

“I suggested it would be fun to write a fictional book based on some of her early childhood memories and amazing career in the sport of endurance riding,” said Eckard. “I also wanted to highlight one of her exceptional horses, HCC Gazal, who still holds the record for winner of the Haggin Cup awards, which is the most prestigious award in endurance racing.”

Through this imaginative, powerful, and heartwarming story, Eckard wants to introduce readers to what she deems as “one of the most exciting horse sports in the world,” while sending messages about love, relationships, personal growth, and adventure.

“The book establishes the special bond Gracie and Gallant have while growing up until they are tragically separated,” said Eckard. “I also introduce Flash, who is the horse equivalent of a bad guy, but once the reader understands his story, they end up almost rooting for him.”

Eckard is an animal lover and believes in volunteering to give back to her community — especially to the homeless animals that need to find their forever homes. Her animals often inspire her writing, blending reality and fiction to entertain, teach, enlighten, and share the joy animals bring to our lives. Eckard is an author, poet, songwriter, wife, mother, and grandmother. She lives in Arizona, splitting her time between She lives in Arizona, splitting her time between her home in Yuma, Arizona and her ranch in the mountains of Prescott. Her life is full of four-legged family members - 3 dogs, 11 horses and a miniature mule! Eckard is also the author of the award-winning Bentley and the Magic Sticks! and GERIBO, The Shelter Cat.

To set up an interview, reading, signing, or for information regarding Gallant: The Call of the Trail, please contact Karen Tahis Eckard at Karenteckard@gmail.com. 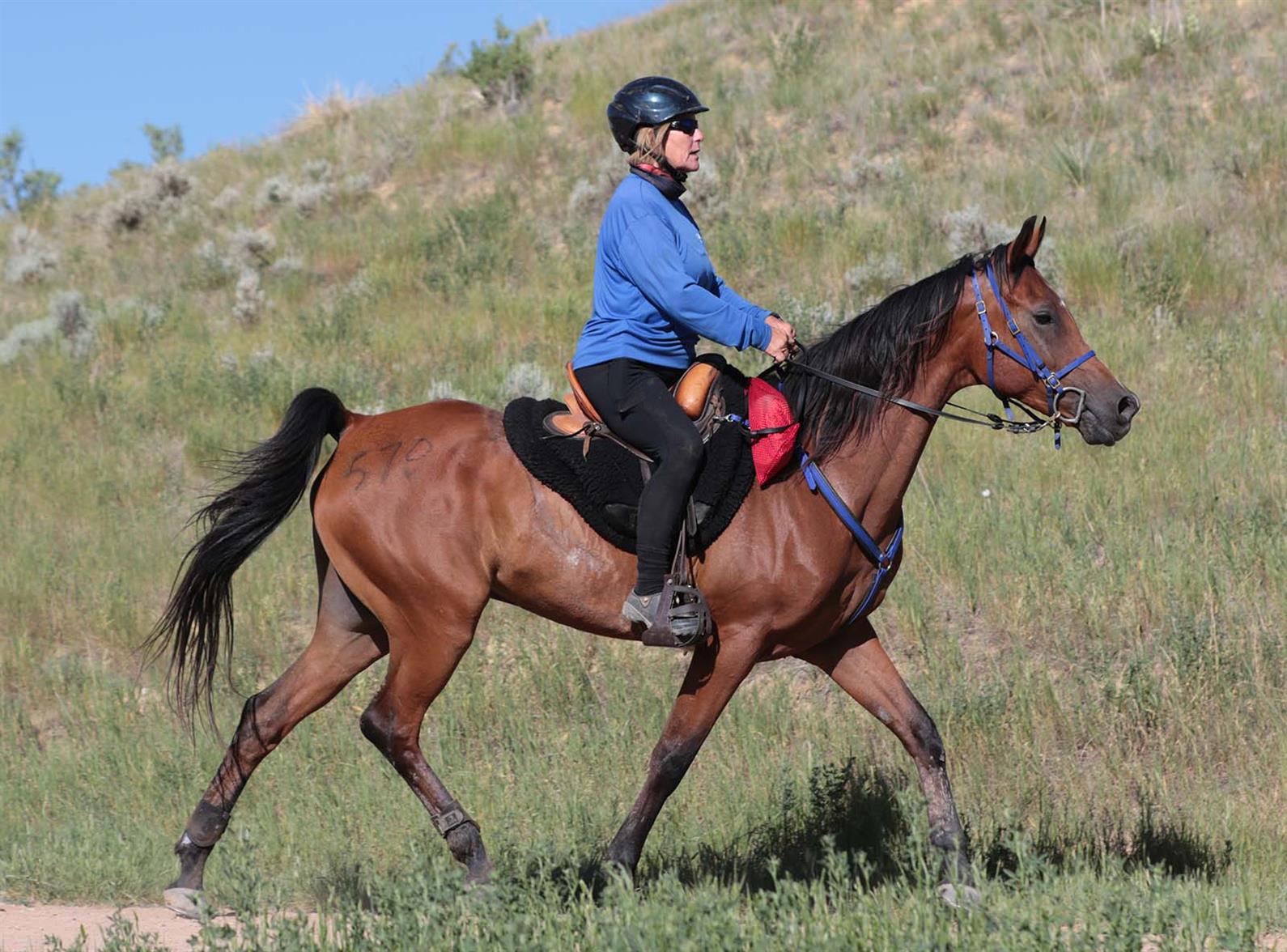 During the 2021 season, Van Deusen rode Nazeefs Flashy Rose, her own 2007 Arabian mare, to third-place finishes at Greenway Gallivant CEI2* 120 in December 2020 and Broxton Bridge CEI2* in January. With her 2012 Arabian gelding, JG General, she won the CEI1* 100 at Horseshoe Bend Boogie in October and was Reserve Champion at the 2021 USEF Endurance National Championship CEI2* 120 in November.

Van Deusen and her 2018 FEI World Equestrian Games partner, Hoover the Mover, placed second at the Greenway Galivant CEI3* 160 in December 2020 and won the CEI3* 140 at Broxton Bridge in January and Celebration 2021 in February. In May, she traveled to Italy with the 2004 Arabian gelding where they completed the test event for the 2022 Longines FEI Endurance World Championships in Verona.

This marks Van Deusen’s fifth consecutive season at the top of the U.S. senior endurance rankings.

Charly Dugan had a busy and successful 2021 season with multiple horses on the road to becoming the top youth endurance rider in the country. With Sally Jellison’s 2014 Half-Arabian mare, Gold N Charm, she won the CEIYJ1* 100 at Celebration 2021 in February. She rode Melody Blittersdorf’s 2010 Arabian gelding, Perseveranze, to a second-place finish at Fun in the Sun CEIYJ2* 120 in March and a win at the Broxton Bridge CEIYJ2* 120 in April.

Dugan had an exceptional year with her own Southern Justice, a 2012 Arabian gelding. Together, the pair finished second in the CEIYJ2* 120 at Broxton Bridge rides in January and April and went on to win the USEF CEIYJ2* National Championship in November. In September, the pair traveled to Ermelo, the Netherlands, where they competed as part of the U.S. Endurance Team that finished in fifth place at the FEI Endurance World Championship for Young Riders & Juniors.

The Maggy Price Endurance Excellence Award is generously sponsored by Gold Medal Farm and Larry and Valerie Kanavy in memory of Maggy Price. Price was the 1992 FEI Endurance World Championship silver medalist and was instrumental in developing international endurance in the U.S. The Brunjes Junior/Young Rider Trophy is awarded in memory of Kathy Brunjes, a successful endurance athlete and active supporter of the junior/young rider program.

More at:
https://www.usef.org/media/press-releases/us-equestrian-announces-endurance-award-winners
Posted by Endurance.Net at 9:09 AM No comments: 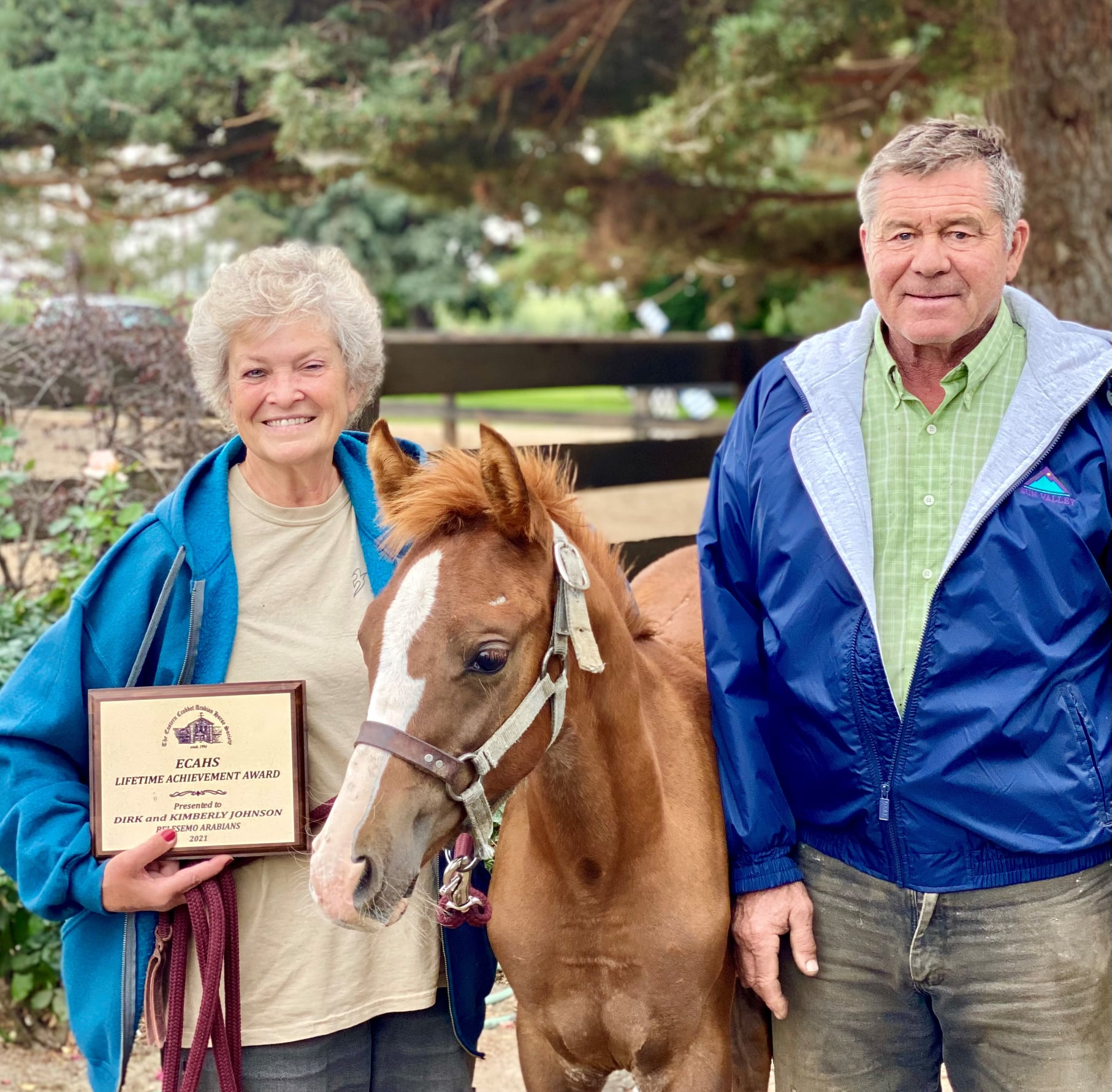 In early 1997, the Eastern Crabbet Arabian Horse Society officers and directors approved the presentation of an annual Lifetime Achievement Award to individuals who best exemplify the ideals as stated in the ECAHS Philosophy through a lifetime of work for and with the Arabian horse.

2021 recipients of this Lifetime Achievement Award are Dirk and Kimberly Johnson of Belesemo Arabians in Caldwell, Idaho, for 40 years of breeding Crabbet Arabians.

"It is with great humbleness and appreciation that Belesemo Arabians received the Eastern Crabbet Arabian Horse Society’s (ECAHS) Lifetime Achievement Award for 2021," Kim Johnson said. "We are honored beyond belief that our breeding program was selected to receive the Award in recognition of almost 40 years of breeding Crabbet Arabians.

"Plans were to fly to the East Coast this summer for the presentation of the award in person at the Crabbet Celebration. However, with the current Covid situation this past year, the committee sent the award to us and we celebrated locally with long time friends/clients Cindy and Tom Lempp from Colorado and Bob and Sue Jerome from Middleton, Idaho.

"Thank you to the selection committee from ECAHS for this great honor. This is most definitely a shared award, as we thank all the wonderful people down through the years that have believed in our horses, and taken them to their national and regional show and endurance titles. Our breeding program would not be what it is today had it not been for you, the talented individuals who chose our horses as your companions, and we owe you a huge debt of gratitude. THANK YOU! You are the true recipients of this honor!" 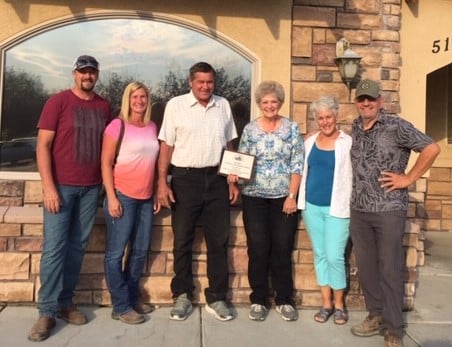 Posted by Endurance.Net at 10:16 AM No comments: Welcome to Episode 52 of Endurance Horse Podcast. In today’s episode we will hear audio that was sent to us from four riders at the 2021 God’s Country Endurance Ride at Cole Creek in Richland, Missouri. This trail is in the Missouri Ozarks and is a lovely combination of riding through pines, hardwood forests though also has some gravel roads, fields and access to a river to cool your horse. It has been awhile since we have had an all listener audio episode of Endurance Horse Podcast, sit back and gather around the virtual campfire while we listen in to some adventures from God’s Country 2021. It is always a joy to get to talk with Tevis riders, and especially one that so many of our WARHORSE Endurance family were following on the Tevis 2021 online tracker. Can you imagine being 2 miles from the finish line and having to pull? That is what happened to our next guest, Lynn Atcheson of Washington State. Lynn’s horse, Banner has a distinctive look with his bright coloring and roached mane, I have admired his photos on facebook for sometime and all the beautiful images Lynn shares of him. I was surprised to learn that he is 21 years old! I was cheering for them watching the online tracker provided by Tevis. Their ride took a turn for the worse and the official miles they accomplished that day were just shy of 98. Can you imagine pulling that close to the finish line?

You are invited to listen in while Lynn and I chat about how she got into horses, endurance and her 2021 Tevis ride...

Listen here:
https://endurancehorsepodcast.podbean.com/e/51-lynn-atcheson-and-banner-tevis-2021/
Posted by Endurance.Net at 9:35 AM No comments: