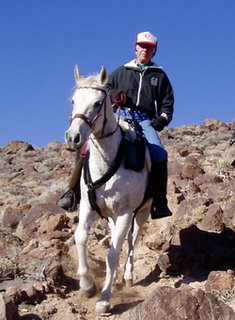 Karen Chaton's report from the ride: " Tonight Tulip was awarded a plaque for becoming the highest mileage AERC horse. On the first day of the ride I caught Tulip as he was
trotting down the center of 395 by himself. Just moments after having bucked Les off going up a hill. Tulip stopped when I called his name and waited for me to come and get him."

As of December 30, 2006 Tulip surpassed the 18,215 mileage of previous record holder Rushcreek Lad, owned by Trilby Pederson.
Posted by Steph at 6:14 PM