The Centauride: Long Rider Coming Through Your State 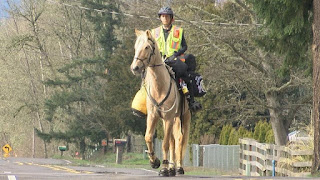 The Centauride: One woman. One horse. One goal: 48 states for Domestic Violence Awareness

Meredith Cherry and her Peruvian Paso-Mustang palomino gelding Apollo are doing nothing short of epic.  They will be traveling alone together for four years, 10,000 miles, to 48 states, on a continuous ride.

Meredith is doing this long ride to raise awareness about domestic violence.  This "silent epidemic" is extremely prevalent in our society.  Although it is not often talked about, it is estimated that 1 in 3 women will be domestic violence victims at some point in their lives (usually between the ages of 19 and 34).

Meredith will be riding to domestic violence centers, women’s shelters, schools and community centers to bring awareness about the realities of this issue and to provide hope to women dealing with the effects of DV in their own lives.

Meredith and Apollo began their journey on January 1, 2017 and plan to complete the ride in 2020.

A little about Meredith and Apollo.

"I've been riding horses for 20 years, and have a B.S. in Equine Science from Colorado State University.  Apollo is the first horse I've owned.  I was raised as a city girl, moved to the country as soon as I could, and love dirt roads, seeing the stars at night, deer in the yard but not in the garden, and bugs (most of them, anyway). I also like to write about food, gardening, essential oils, and the California missions (I've written two travel guides for these)

I escaped a domestic violence relationship a few years ago, and what I had missed most during my marriage was horses and travel.  Thus came about the wonderful, crazy idea to buy a horse with my paltry divorce settlement and ride it around the country.  And since I feel so grateful for this opportunity, and so saddened at the thought that anyone else is going through what I did, I felt it was right to use the ride to help everyone I could meet along the way.

I met Apollo in 2014, and it was love at first sight.  He is a spunky Peruvian Paso-Mustang palomino gelding who is a different color in the summer versus the winter.  I waited a few months after I bought him to tell him about our long ride plans though!  He's not so sure he wants to work that much, but since he does like seeing and tasting new things, he's agreed to be my ride partner."

For a map (maybe you will have a place for Meredith and Apollo to stay), and more information on this adventure, see
http://www.centauride.org/