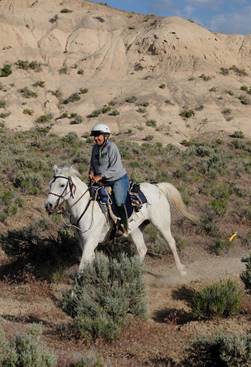 Dot started riding horses before she was born; she believes she may have been conceived on Bear Tooth Pass, Montana, as her Mother and Father rode from Red Lodge to Cook City. Dot's first endurance ride was in Vale, Oregon, in 1976. She joined AERC in 1980 when she was in her 50’s.  She came to endurance after a lifetime of punching cows and breeding Quarter horses.  She quickly excelled, riding her beautiful palomino Quarter Horse Stallion, Scotch and Soda. She completed six 100-mile rides on Scotch, including the Race of Champions.  Scotch retired with almost  3,500 career endurance miles and was never pulled. Known as a great gentleman of the trail, Scotch pulled many tired horses and young competitors across the finish line. Many will remember Dot’s other endurance mounts:  Duffy, Tess, Zinger, and Kris.  Dot always put her horse first and was a role model and mentor for many endurance riders. Of the 188 rides she started, she finished 182. She completed 8,090 miles of endurance and rode her last 50-miler in 2009 at the age of 79 1/2.  In her later years she dropped back to Limited Distance Rides and completed exactly 2000 LD miles from 1996 to 2013.

Dot was a fierce advocate for trails. Over the years she worked with the Forest Service and BLM as well as private land owners to preserve equestrian trails.  In 2016, AERC recognized Dot by presenting her wth the Ann Parr Trails Preservation Award. Dot was one of the founding directors of the Friends of the Weiser River Rail trail.  The 85-mile Weiser River Trail is one of the few rails to trails in the nation owned and managed by a nonprofit organization. From 1982 through 2000, Dot managed the Hells Canyon Endurance Ride. As a Forest Service employee, she worked at the Sturgill Peak Fire Lookout. As she performed her job, she scoped out and plotted the beautiful and challenging trails that became the Hells Canyon Ride. Dot was always eager to help search for good trails, clear trails, mark and un-mark ride trails.  She will be missed.

Posted by Endurance.Net at 1:09 PM