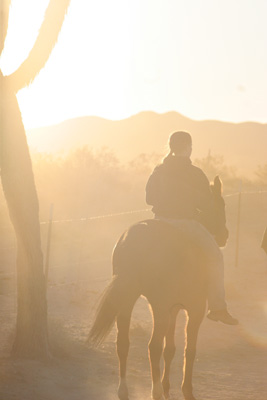 Gretchen and I set off for the 3-day Eastern Mojave Scenic ride, in the National Mojave Preserve outside of Baker, CA, whose claim to fame appears to be having the world's largest thermometer. Gretchen and I were a bit worried as the temperature started climbing... 68*, 71*... not bad. Then it got to 75*... 78*...

The traffic was awful - thousands of people heading for Vegas for the holiday weekend [Editor: The NBA All Star Game - LA -> Vegas....]. It appeared that thousands of Vegans were also fleeing Las Vegas for the better (?) environs of Los Angeles.

We pulled into ride camp where, by 2 PM, it was looking a little like the crowd at Burning Man: BIG. Lots of trailers, and more coming in. We unloaded the horses and saddled them up for a ride.
Posted by Endurance.Net at 11:45 PM