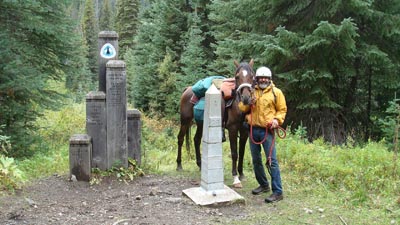 On 09-9-09 Primo and I reached Monument 78 located at the border of Canada. It is the northern terminus of the Pacific Crest National Scenic Trail. We had left the border of Mexico on April 19, 2008. The scenery along this trail is beautiful and sometimes spectacular. This was especially true of the North Cascades of Washington - absolutely awesome. There the trail can sometimes be challenging. There was a tragedy about three weeks ago when a woman from Georgia lost both of her horses down a vertical cliff. They died on impact. Fortunately she had been leading. She pressed the 911 button on her SPOT and was rescued by helicopter. She had taken a part of a detour section that was considered dangerous to horses. I had bypassed that place. I am thankful that Primo is a relatively small horse (14.3 hands and about 900 pounds). He is very agile and sure-footed. He knows where to put his feet - and also where not to put them. We trusted each other and took care of each other.

The picture that I am attaching was taken on my camera by a thru-hiker from Finland who arrived at the border a few minutes after we did.

MendoRider - - - aka Ed Anderson in the other world
Posted by The Equestrian Vagabond at 2:00 PM