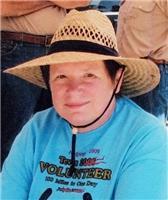 Marion Inez (Robie) Arnold, age 72, of Newcastle, California passed away peacefully in the early hours of Friday, June 15, 2018. Marion was a noted horsewoman and pioneer in the sport of endurance riding.

Marion was born on August 8, 1945 to John and Elizabeth (Kangas) Robie in Sacramento.

Inspired by her grandfather, Wendell T. Robie, Marion learned to ride before she could walk. Arabian horses, trail riding and endurance racing became her life's passions. In 1958, at the age of 12, Marion finished the (now) historic 100-Miles-One-Day Western States Trail Ride (colloquially called the Tevis Cup) that was founded by her grandfather. She would go on to finish the ride 10 more times, winning in 1969. Her eleventh and final completion was in 1994 with her son. Shortly after her final Western States Trail Ride, she transitioned to NATRC where she rode and worked tirelessly. She will especially be remembered for a NATRC event that she co-chaired out of Robie Park in Truckee. She was one of the founding members of the American Endurance Ride Conference (AERC) and was elected to their Hall of Fame in 1982. She was also a founding member, and former president, of the Wendell and Inez Robie Foundation.

After graduating from Placer High School, class of 1963, as a National Merit Scholar, Marion attended Wellesley College and California State University Hayward, graduating with a major in mathematics, teaching math shortly thereafter. Marion enlisted in the U.S. Air Force during the Vietnam War and cared for newborns at the base hospital at Travis Air Force Base.
Marion's family is very proud of her military service. But it was in promoting and celebrating endurance riding and conserving the historic emigrant trails of the High Sierra mountains where she made her mark. Marion will be sorely missed by all who love the mountains and who know we love them best from atop a horse.

Posted by Endurance.Net at 7:55 AM