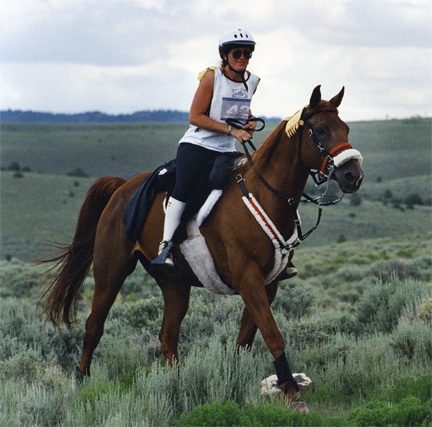 photo: Kooter and Suzie Hayes
I wanted to let you all know that my friend and one of the greatest
endurance horses ever passed away this morning. Kooter (Kootenai Zizzero,
AERC #5081) started his life with me in 1982 and we spent his entire time
together traveling all over the world, experiencing everything the endurance
world had to offer. He is now in a place where he can go as fast and as far
as he wants, running down the trails with many of the endurance greats that
have passed before him. I will miss seeing him in the pasture making all
the other horses and mules play with him, his exuberance when it came time
to feed, and his many tricks to try and angle a way to "go just a little bit
faster" when going down the trail. He was a once in a lifetime horse and I
feel very fortunate to have shared it with him.

Lest we all forget, his record in endurance was one that hasn't been seen
often and is a testament to his joy in doing a job he loved.

My prayers are with you and kooter
Take care