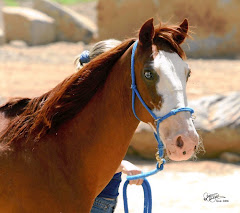 I didn’t even suspect that Tevis 2007 would be my next to last completion with Sinatra. We had been battling squamous cell carcinoma, a type of skin cancer, on Sinatra’s left upper lip/nose area for the past few years. That summer, the cancer was very much in remission and was nearly gone entirely. Unfortunately, in the Fall it came back with a vengeance. After numerous trips to several local vet clinics, and a trip down to UC Davis for a consult with the equine oncologist, the very hard decision to retire Sinatra to a life of leisure, food and fun out to pasture with a herd of other horses was made. Sinatra enjoyed 4 months of living in horsey paradise before having to be euthanized due to his cancer in December 2008.

I find it fitting that our very last ride together, was also our very first - The Rides of March here in Reno, Nevada. Also, they have now moved to a new ridecamp location, and Sinatra's ashes are scattered among the hills overlooking the new trail. From our very first 30-mile limited distance ride in March 2003, to our last 50-mile completion in March 2008, Sinatra was my partner and friend. He could be a total pain in the butt (heck, be bucked me off on BOTH of those rides), but he could also be my steady-eddy trustworthy trail partner. I'm very blessed with some of the precious memories he left me with:

* The faces he would make when I would scratch in all the right spots. I think he could stick his upper lip out 4" and roll his eyes clear back in his head. How I couldn't ever clean his corral without him "accidentally" backing up and WHOOPS! putting his butt right in my way to be scratched.
* An early morning start at the Tour de Washoo ride, where a coyote stood on a rock at eye-level with me not 50 feet from the trail and watched us trot by.
* Power trotting the California Loop at Tevis after 80 hard miles - so strong and sure in the lead, his dark coat gleaming in the moonlight.
* The time he went down on his knees unexpectedly, with me mounted, to get a drink out of a puddle that was in a deep depression, and forgot to LIFT his head to compensate and scuba dived clear up to his eye balls in mud. He blew mud balls out his nose for hours! I laughed so hard I nearly fell off.
* Having to stand in my stirrups to slow him down coming into camp on our first 100, I was so awed by him that day/night.
* Being asked to have Sinatra sponsor other horse's through a ride, many times! He had "steady chug" down to a science.
* Winning the Hairiest Horse Award at our Spring local schooling show... by a LONG shot!
* How he would go off the trail and plow over the top of taller bushes to scratch his belly and legs when he was sweaty. And how at Sunriver he did it with a small pine TREE and was grunting and groaning with pleasure while rocking back and forth, branches sticking out every which way, me on top. All 3 of us girls riding were laughing so hard, I was in tears.
* Our quiet moments together in the evenings
* His expectant face - waiting for something to eat - everytime I got in my trailer at a ridecamp, and how he wasn't often disappointed.

Good bye my buddy – on your back was accomplished the dream of a lifetime. You will always be in my heart. I miss you... so much!