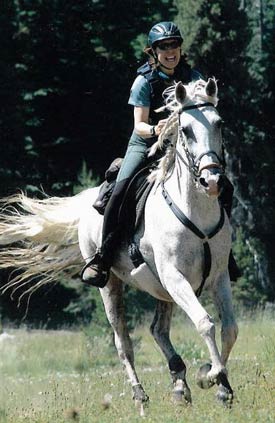 A new breeding promotion for the Shagya Arabian horse breed in the US is aiming to increase awareness in the breed.

The American Shagya Arabian Verband is giving owners the chance to breed their mares for a stud fee of $200. There are only about 150 of the breed in the US, and 1500 in the world.

A famous descendent of the Shagya is the "stallion of the century", Ramzes, who was by a thoroughbred sire and from a Shagya mare. He began the "R" line prominent in dressage and grand prix jumping family lines. ASAV has a registry book that records the Anglo-Shagya cross.

The Arabian-based Shagya breed has been around for more then 200 years, with a certain type being bred for and ruthless culling to set its traits. Breeders say the Shagya's temperament and mind are second to none.

In Europe Shagya blood it is highly prized, and many Shagya stallions can be found in the warmblood studbooks. It is one of the recognised breeds used in Trakehner breeding. "They can add refinement without loss of bone and substance and superior horses in the first generation. They are not supposed to resemble purebred Arabians, although nothing, but Arabian, is allowed in the studbook. Instead the old horse masters selected for superior riding qualities and temperament," the ASAV says.

"The modified Baroque conformation crosses well with all breeds and improves hip and shouder angles, legs and feet and a soft back that is easy to sit. Typically one can expect taller foals with more bone and substance."

The goal of an ideal cavalry horse was the orginal purpose for the breed's existence. This has been accomplished and resulted in a potent and desirable animal. The breed has been discovered by the endurance people and many purebreds and cross-breds are competing at the FEI level and have won international races.

One cross that is producing division winners in the hunter ring is the Shagya stallion crossed with Thoroughbred mares. The foals are tall, with improved conformation, better feet and legs, and all of the flight reaction of the Throughbred is replaced with a lovely prospect, perfect for jumping, combined training and many other disciplines.

I have bred my Tevis winner Fille de Cailana AHA# 316749 as well as another mare Cameo Corrine AHA # 361326 to Oman NASS -82-004, an imported stallion from Hungary. The results are nothing short of spectacular! Fayette de Cameo out of Cameo, won Tevis Cup and the Haggin Cup and many other rides as well. In addition SMR Garcon my stallion out of Fille has done very well and is producing outstanding foals. While Garcon stands just a bit over 14-1 all of his foals have been large and have excellent conformation as well as dispositions. SMR Garcon and a few others can be viewed on my web site www.TevisPost.com.