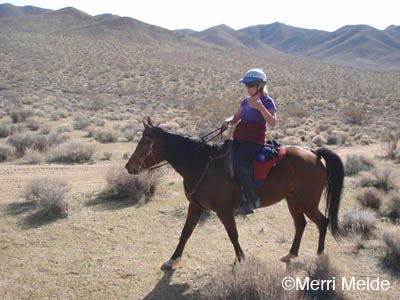 The West region's Gretchen Montgomery reached the 10,000 mile mark in AERC competition at the Gold Rush Shuffle over Thanksgiving weekend. Spending her retirement time between Bridgeport and Ridgecrest, California, Gretchen hit the cent-mark aboard her part Standardbred mare HS Coquette.

Gretchen and Coquette have over a thousand miles, and many other thousands of miles have come aboard her mare Definetly Spice (formerly known somewhat affectionately as "Bitchy Spice") - her Decade Team horse, and the gallant gelding Royal Raffiq, who died in 2010.

Gretchen manages the Fire Mountain ride in Ridgecrest in January, and the Eastern High Sierra Classic in Bridgeport in August.

Posted by Endurance.Net at 8:48 AM