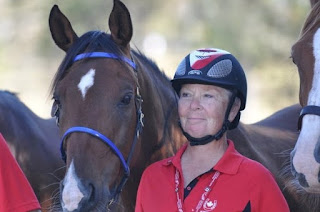 We have celebrated volunteers before in our monthly Facebook page feature post and banner photo- the folks out in ride camp and on the trail that are key to successful endurance rides. Yet many do not know there are a host of volunteers outside of rides silently carrying out the often-mundane business that keeps the PNER going as an organization. These things usually involve late nights pecking away at a computer, answering endless emails, or sitting on the phone during long tele-meetings. So this month we begin a series featuring on our banner some of those unsung heroes of the organization whose quiet, often uncelebrated efforts keep the PNER ticking!

Everybody, meet Terre O-Brennan, the PNER British Columbia Provincial Representative. Terre is first a horsewoman and of course an accomplished endurance rider outside of her more mundane PNER duties. Pictured on the banner are Terre and her horse Koszaar at the World Equestrian Games in 2010 where she represented Canada.

Terre’s involvement with horses started with riding rental horses at 16, as soon as she got her driver’s license. She had lived an entirely urban life with a military family, always moving, and no opportunities to ride. Determined to make a horses a part of her life, she used a student loan to buy her first horse (a totally appropriate use of student loans, right!?) “Cavvy” was a 14hh stockhorse-type pinto of unknown age. Showing was not much fun for them, so they hit the trail and never looked back. They hauled all over British Columbia, camping and riding together.

Sometime circa 1982, she saw a poster in a feed store for something called an “endurance ride." When she called the number on the poster, the person on the other end of the line said “just show up and we’ll tell you what to do.” So, she showed up with her stocky little pinto pony, in jeans and a cowboy hat. They finished the 25 quite happily, in the middle of the pack. Someone later suggested she give him some salt and that was it for post-ride care. But she was hooked and they went on to do a bunch more 25s- all top 10! And a couple of 50s! But by then, he was well into his 20s she felt endurance was too hard for him. So like many wanting to continue on in the sport, she went out and bought an Arabian… and kept going.

Fast forward to today, she has accrued around 8600 miles, most of it with AERC and some FEI. She has done 23-24 one-hundreds on 3 different horses. Tequila Sunrise and Koszaar were her main mounts. She and Koszaar twice qualified for Worlds.

Her partnership with Koszaar is incredibly close and he is still going strong at 24, closing in on 5000 miles, almost all Top Ten, many FEI rides, and has completed 13 one-hundreds. She describes him as her soul-mate. but reflects that she was also incredibly close to her first horse, the little pinto Cavvy. Despite being different breeds, the two horses are so alike in personality that a rather new-agey friend of Terre’s seriously believes that Koszaar is Cavvy’s soul, found its way back to her.

When asked what challenges has faced as an endurance rider, she reports “like everybody else, money and time.” She has overcome them by "not spending either on anything else."

Terre has been a member of the PNER for 20 or so years. To her, the PNER serves as "a big extended family of like-minded people who love the mountains and lakes and rivers and grasslands, who value and respect their horses, and who love the challenge and thrill of the sport of Endurance. "

She is quite active as the British Columbia Provincial Rep. She forwards copies of all BC ride results to the points secretary; she submits funding requests to the Anna Sampson -Marry Nunn Fund to sponsor Junior riders; She strives to promote then PNER whenever possible and would like the BC riders to have a Team again (at one time BC had TWO teams before the border became so problematic); and she nags people to declare for awards and such, and mentors quite a bit. Somehow, she has also found time to serve on the Education Committee and continues to be a Ride Manager.

She reflects that each smaller ‘region’ within PNER (state and province) have unique problems that need to be brought to the Board for the benefit of those riders; they may be economic, or political, or whatever. She says "we need as many voices and viewpoints as possible to stay in touch with the riders, vets, ride managers, and even vendors who operate locally, in our region."

When asked about her favorite memory riding endurance, not surprisingly, it doesn’t involve participating in late night board meetings for the PNER. Rather she celebrates a moment that happened in the dark of night, towards the end of a tough 100. “We suddenly got full moon-light...you literally could have read by the light it was so bright...and I could see my horse’s shadow...the reins, the sponge, every detail...flying across the ground beside me as he cantered for home. Unbelievable.” We can't help but believe Cavvy's spirit helped light their way to home that night.

Posted by Endurance.Net at 9:31 AM