Behind the Lens: Get to Know Endurance Ride Photographer Susan Kordish 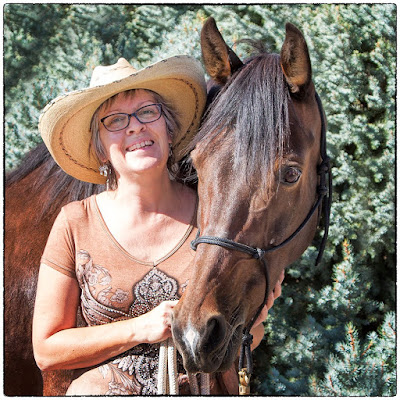 Next up in my "Behind the Lens" series, featuring members of the Endurance Ride Photographers Guild (ERPG), is Susan Kordish, of AZ Cowgirl Photography.

Those of you who ride in the Southwest region have seen Susan behind the lens the last decade. In this article, Susan shifts between saying “I” and “We,” because her husband John is a very important part of her photography business. “He takes great photos,” Susan says, “and one of our Endurance News covers was actually his image. We are two halves of a whole.”

Where do you live?
We currently live in Skull Valley, Arizona. We vacationed here for 10 years prior to moving here in 2005 from Northern Vermont.

What is your profession?
My husband John and I owned and operated a convenience store/gas station for 20 years in Vermont. When we moved here to Arizona we both went to work for the local casino operation. I still work full-time as the Administrative Licensing Technician. My job is to process people's paperwork and do the initial background investigation for gaming licenses (required to work in a casino). I am hoping once I retire to make photography my full-time occupation.

Do you have horses? Do you ride?
I began riding at 8...and I am now 60. My very first horse was actually a Chincoteague Pony. His name was Little Fellow and the man that owned him wrote a book about his early life called "Hundred Acre Welcome" by Ronald Rood. Little Fellow came to me when I was 10 and he was 6. He lived with me until he was 36! Currently I have a registered Morab gelding named Chase. He will be 21 this year. John has a registered Arabian mare named Fancy. Fancy will be 28 this summer.

When I was a kid I competed in hunter/jumper, eventing, gymkhanas and some dressage. My husband and I competed as a team in hunter pace events in Vermont. Since moving here we are trail riders although neither of us is riding lately.

How did you first get into photography?
I casually did photography as a kid with a little 110 camera. My big breakthrough came on our first trip together to the West. We made a trip to Las Vegas in the early 90's. I had met a horseback rider and photographer on an AOL chat room. She said she would take us riding in the desert around Las Vegas. Not only did she take us riding, she took us on a photo safari to the desert near Vegas and handed me her Minolta 35mm with a 70-300 lens and pointed out mustangs in the desert! I was HOOKED! When we got home I bought the same camera and lens combo; I still have it but have moved on to digital. While in Vermont I mostly shot dressage, hunter/jumper and some gymkhana and team penning. I also do some fine art photography and editing.

What equipment do you normally shoot with?
I currently have two Canon 7D bodies, one has a 70-200 f2.8 pro lens and the other has a 24-105 f4 pro lens. My husband is my second shooter. We both use monopods to help with the long hours that shooting endurance rides entails.

When did you start shooting endurance rides?
I originally shot alone. Our first endurance ride came about in an interesting way. We were set to volunteer at a new endurance ride happening right here in Skull Valley. I first tried to be the Official Photographer, but another photographer (Linda Sherrill), well known in the endurance world, was already chosen. The day before the ride I was asked if I could shoot the ride, as Linda was ill and couldn't make the trip. That ride was the Prescott Chaparral Ride in 2011. I had a Canon XTi and a 70-300mm lens and no website. I was able to get a website up and running in 3 days. It wasn't pretty but it functioned and I had a way to sell. A few years later my husband John started being the second shooter so we could get more images of each rider.

Why do you like shooting endurance rides?
We love the excitement and camaraderie of the endurance shoots. We know many of our riders by name and they know us at this point. I love the smiles and kind words they share with us. We feel like part of the endurance family here in Arizona.

What are challenges you find in shooting endurance rides?
The challenges are to find great locations, and the weather. Most of our rides are a bit of a distance from where we live, so we either have to make a scouting trip or arrive a few days early to scout. The weather is usually great but once in awhile the rain comes and makes it very hard. Had an expensive repair when the rain cover didn't protect well enough...I have since purchased a better rain cover!

What are one or two of your favorite ride shooting stories/adventures/misadventures?
Every November we photograph the Lead, Follow or Get Out of My Way ride at McDowell Mountain Regional Park down near Phoenix. We always take our mountain bikes because the biking is wonderful there. So, the ride was on Saturday...I spent much of Sunday working on images, so Monday we decided to head out for a bike ride. About 3 miles in...John fell crossing a dry wash. I could tell immediately that he was hurt bad!! The rest of that day was spent waiting for the helicopter to arrive...then meeting the ambulance back at the park. I was dropped off at our travel trailer to arrange to stay a bit longer - we were supposed to head home the next morning. I arrived at the hospital to find John in the ER with a broken femur/broken hip. A couple of days later while John was having surgery to put a titanium rod into his femur I had to learn to drive the truck pulling the travel trailer alone for the 3 or so hour drive back home. Having driven horse trailers I did fine, but yikes. The good news is he is on the mend and he only missed one shoot.

Also...last April while at our first location at the Lead, Follow or Get Out of My Way at Bumble Bee we got chased out of the desert by a huge bull. We were walking back towards the car to catch the last few riders when we started to hear a bull calling out behind us...then crashing in the desert brush...walking faster I looked back and it was coming our way! I don't think he actually had bad intentions towards us BUT we were in between where he was and where the other bull was. We stopped once we were safe and took a few shots of them sparring!

And any other pertinent info you’d like to share with us?
We have been fortunate to have been published extensively, with covers on The Horse, The Horse's Hoof, Trail Blazer and Endurance News. Many of our photos have been used to illustrate articles and for advertising. Along with our website we have a Fine Art America site. I also have my fine art work available locally at The Prescott Art Market and the Skull Valley Station. In the past I entered many juried art shows both locally and online.

Below are a couple of Susan’s favorite shots and rides over the years. 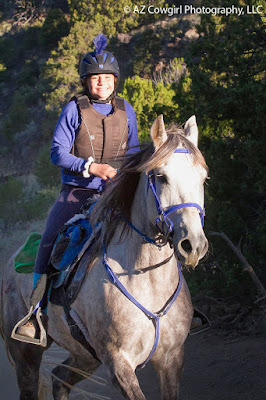 In the Flagstaff Monsoon Fever ride in Arizona, Junior rider Hailey Zehring is riding Andrea Maitland's mustang Wyatt Earp. This made the cover of Endurance News a few months ago. 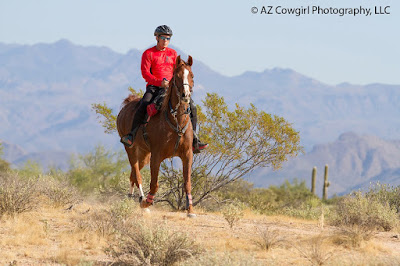 Brad Person in the Lead, Follow ride in McDowell, Arizona. Brad is Susie Kramer's significant other. 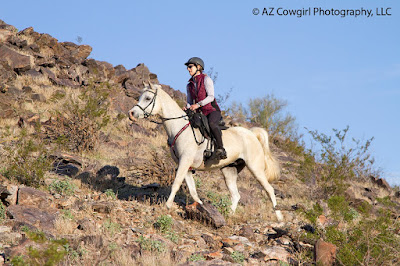 Mary Jane Fridley on Dreamer, in the Dashing through the Trails ride near Goodyear, Arizona. 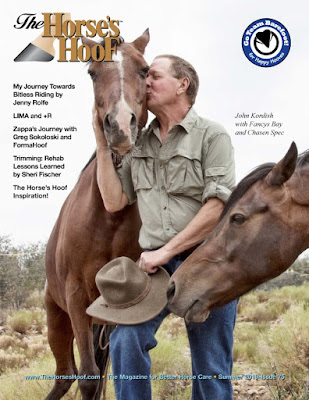 Behind the Lens: Becky Pearman profile is here:
http://tracks.endurance.net/2020/02/behind-lens-get-to-know-endurance-ride.html

Behind the Lens: Dave Honan profile is here:
http://tracks.endurance.net/2020/03/behind-lens-get-to-know-endurance-ride.html

Behind the Lens: Linda Sherrill profile is here:
http://tracks.endurance.net/2020/03/behind-lens-get-to-know-endurance-ride_16.html

Behind the Lens: Steve Bradley profile is here:
http://tracks.endurance.net/2020/04/behind-lens-get-to-know-endurance-ride.html

Posted by Endurance.Net at 8:36 AM