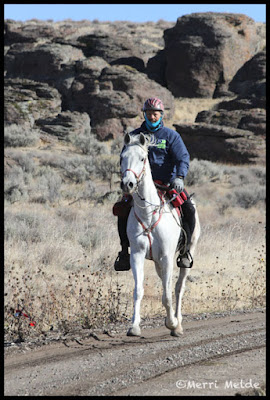 To the casual eye, the 5-day Autumn Sun Pioneer ride in October in Gooding, Idaho, was just another endurance ride. It wasn’t even all that unusual when Christoph Schork won all 5 days of the 50 milers. But what will be remembered of this now-historical event is that with his wins, Schork set another AERC record that’s unlikely to ever be touched. The Three Hundred Win Man transformed into The Four Hundred Win Man. If it wasn’t enough setting that win record, he also became the first rider to reach 200 Best Condition awards with his mounts.

And if you think he’s excessively busy with just riding 50-milers and winning, you’d be missing the whole picture. Particularly during this strange COVID season, where his usual interns from Europe have been prevented from flying to the US, Schork has been handling a trailer full of horses at a multi-day ride by himself. After he pulls into Ridecamp, he’ll set up his 4 or 5 horses with food and water, and get each horse’s equipment ready. (He’ll also have several busy, opinionated little dogs to take care of.) After he finishes competing on Day 1, he’ll get back to camp, take care of the other horses, and take Day 2’s horse out for a warm-up ride, and so on throughout the event.

But he also stays busy helping other riders. Need advice or help with hoof care or glueing on boots? Schork will help. Need a saddle fitted before your ride? He will make time to do that also. His helpfulness is bountiful and his energy seems limitless.

Schork set the tone of his 33-year endurance career from his first ride in 1988 with a win. Since then he has completed 676 rides in 730 starts for a 92.6% finish percentage with over 38,000 miles, an outstanding figure when you realize he’s almost always competing to win. And many of his horses have had long careers, several having surpassed the 3000-mile mark, including:

Schork’s Global Endurance Training Center in Moab, Utah, an ambitious endurance venture which he started with Dian Woodward in 2002, (she has since left), is the base of his endurance operations. Here he conditions his horses and also trains endurance riders, most notably for Mongolia’s Mongol Derby and the Gobi Gallop. He also leases his horses to endurance riders; multiple clients have earned Tevis Cup buckles aboard his horses.

Such a rise to the top rung in this sport has come with trials and errors and growing knowledge and fine tuning of Schork’s techniques over the decades. Though he makes it look easy, he’s the first to maintain he’s not an expert.

Asked how he’s earned such success, Schork summed up his methods.

First you have to have an inherent sense of competitiveness. If you’re not really competitive by nature, you’re probably not going to be that successful.

After that, you have to have a commitment to success. You must want to succeed. That only works if you have the dedication to the sport, that you actually love what you’re doing. If you don’t really have the passion for it, then you’re not going to succeed. That’s kind of the foundation.

Then after that, you have to have a plan. And in that plan, I think what’s really important is to have an alternate plan, or plan B, if it’s not working the way you want it to work.

And with both plans, the key is attention to the detail - the little things that could make or break success. If everything goes well, you’re doing OK. But if not, and you’re missing a detail, you might not succeed.

Never stop learning. That’s a big one. You have to learn from others, as well as from your own mistakes.

Also for success is my willingness to help others. If you actually sacrifice yourself sometimes for others, it always comes back to you and turns out as a benefit for you. So the time you spend and the energy you put into helping others to succeed also will come back as an additional benefit to you.

And last, whatever happens, always stay humble. Always be open to learn more. Be willing to admit to your own mistakes and your own shortcomings and work on improving on it. Learn from your own mistakes.

Schork also attributes part of his success to doing his own hoof care, changing over years ago to synthetic shoes and boots made by Easycare. Schork says, “Easycare was one of the front runners in that, and that certainly helped my horses to cover ground more expediently and more efficiently, and it also helps protect the joints and cartilage of the lower legs. Easycare’s R&D [research and development], their support, and their commitment to the welfare of the horse is a big thing for me.”

Asked what Schork has learned between win #300 (July 3, 2016 aboard GE Pistol Annie) and win #400 (October 11, 2020 aboard GE VA Blizzard of Oz), he points first to his horses’ mental states. “The more I work with horses, I realize how important it is to work with the psyche and the mind of the horses - getting more in touch with their minds and feeling the horses more, feel their strengths and weaknesses, and work close within these parameters,” he says. “I want to keep them happy, because a happy horse performs better.”

Schork has also learned to take each horse’s mind and ability into account. “A horse can have the perfect body and the best heart rate and lots of skills and talents, but if there is no drive or desire on the horse’s behalf, the best body does not bring home the gold. But the best mind can often overcome physical shortcomings. Discipline and mental toughness trump talent and conformation almost all the time.

“Another thing I realized as I learn more, that the more you try to force something or the more you are wanting something really bad, like forcing the win, the less it might happen. So I give much consideration to a horse’s mental state, allowing a win to happen, not forcing it. Stay relaxed about it, as the more relaxed you can be about it, the more relaxed the horse is going to be, and the better you’re going to perform as a team with the horse.”

While Schork himself is a person many endurance riders look up to, he cites several people who he has admired over the years, starting with his first mentors, Arlene and Bob Morris, longtime endurance riders now retired in the Northwest. Schork got his first endurance horse, Dahn Hallany from them.

“I was always looking up to Kevin Myers. He’s not with us anymore, but his dedication, his knowledge, and his problem-solving skills were always very inspiring, and we were also good friends.

“Another person I always look up to and admire is Garrett Ford, for his endless strive, for his ability to think outside the box, and to come up with solutions to problems. His mind is never resting. I think I’m able to say that I’m always busy, but not compared to Garrett, who’s in hyperactive mode in his mind all the time and physically. I certainly look up to him, and he’s also a friend. I can always learn something from him.

“I’m also always looking to Suzie Hayes for her tenaciousness, for being how relaxed she is, how successful, for how she never gives up no matter what comes her way. She’s always overcoming obstacles. She definitely falls in that category as somebody I look up to and respect highly.”

“Certainly the Top Ten finishes at Tevis fall in that category. (His highest finish was a 3rd on Taj Rai Hasan in 2005). The Big Horn 100 win (on DWA Express in 2008). The Virginia City 100 Best Condition (BC and 2nd place on GE VA Blizzard of Oz in 2018). The Australian Quilty win (in 2007 aboard Arovo Mini Harvest, owned by Anton Reid, who tied with Schork aboard Endurowest Kumari). The Gobi Desert Cup win in Mongolia (2018).

“And that win is maybe one that really sticks out, because you ride different horses, most of them are half wild, and they’re not really conditioned for 50 miles. They are conditioned for 30 or 35 miles, so you have to read the horse, know how you can ride the horse to their full potential, but not over their potential, but not too much under their potential, because otherwise you’re not going to win. So it’s a very fine line. Riding these horses to that exact point is just a special challenge, compared to one where you know exactly how it’s going to perform because you know their strength and weakness. There you have to really feel the horses and get in synch with them rather quickly.”

As for Schork’s goals, the 67-year-old is not ready to slow down yet. “Certainly I want to reach the 40,000 miles, which hopefully will happen in the next couple of years if the Coronavirus doesn’t cancel too many rides.” Schork is 7th on the all-time AERC mileage list, and during many normal ride seasons, he’s ridden well over 1800 miles.

“I would like another try at the French Florac (France’s most famous 100-mile ride). I also want to reach my 10 Tevis finishes. I have 6, and I’d definitely like to get the 1000 mile buckle.

“And, who knows what the future brings, but maybe I’ll make it to 500 wins before the inevitable retirement, sooner or later, when the body isn’t as strong anymore as the mind,” Schork laughs.

With Schork’s sustained passion for the sport of endurance and his quest to continue learning, it’s entirely conceivable he’ll achieve all of these goals.

Garrett Ford sums up his friend:

“There is not another person in the sport that is close [to his wins and BC records]. I would bet these marks will never be surpassed.

“Christoph has achieved these accomplishments with respect for his horses and fellow competitors. He’s a class act that is most often helping others with Hoofcare or saddle fit during events.

“I’ll shed some tears when he enters the AERC Hall Of Fame.” 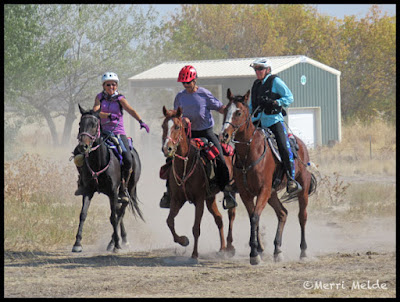