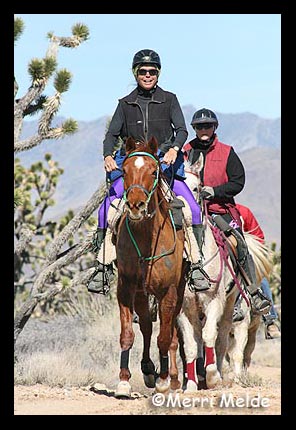 If you've been lucky enough to ride a 5000-mile endurance equine, you have an idea of the soundness and persistence required for a horse to reach such a milestone in the sport.

There are a few equines that rise above that, to the very top of the sport. The hallmark traits of these equine athletes in the U.S. are toughness, consistency, and longevity.

No award in AERC - or in any endurance conference in the world - demonstrates the excellence of the true endurance horse more than the Perfect Ten Equine: a horse who has completed 10 years, 10,000 miles, 10 first place finishes and 10 Best Conditions over their career.

On Saturday, October 24th, after completing the 50 miles at the Bill Thornburgh Friends and Family ride in California, another equine joined this elite group: Ann Kratochvil's mare GF Brazils Envy. 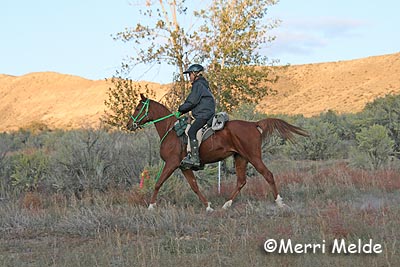 Looking back some 12 years (Envy is 17 now), there wasn't much indication of what was to come over the next decade. "When I brought her home to Ridgecrest [California] from Utah," Ann says, "everybody asked me, 'Why'd you buy a Quarter Horse?' She was enormous! She'd lived for 5 years in a 5-acre alfalfa field, totally flat, no rocks, no water crossings, and did nothing but eat."

Ann still liked the looks of the mare, by Brazil DWF out of LL Jealousy, by Lamolin. Those lines are mostly CMK, with a little Russian and a little Spanish. But Ann turned the mare down when she flunked her pre-purchase exam. The owner took Envy to a vet clinic outside of Salt Lake City, where they did numerous radiographs on her. "They said there's absolutely nothing wrong with this horse - she was just shod so badly," Ann says. Even today, Envy 'paddles' a a bit with her hind end, if veterinarians want to get nit picky when Ann vets her in for rides. "It's hard to keep shoes on her back feet because of the way she moves. She wears them off. I really thought that was going to do her in, but it hasn't been an issue. Yep, she's been like that for 9000 miles!"

Envy had only been started a little a two; at 5 she was worked in a round pen indoors, and "she may have been out on the trail 3 times." To say she was spooky was a bit of an understatement. "She'd spook and do a 180 and run off. But I'd already fallen in love with her!" Ann says. 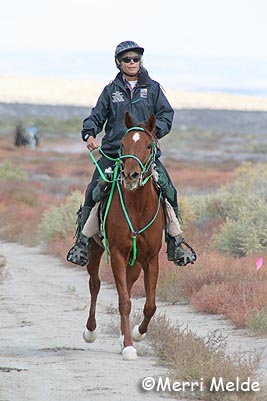 Ann called up her friend and trainer Callie Thornburgh, who lives close to Ann in the Mojave Desert. Callie told her the green horse just needed more wet saddle pads. "Envy was real spooky, and she didn't really know how to rate her speed," Callie says. She's known Ann for over 20 years. "It was either a fast trot or a slow walk. We started training her, put Ann on her in lessons - and now look what happened!"

Envy's first endurance season in 2006 was a modest one, with two Limited Distance finishes and 3 50-mile finishes. In 2007 she completed 10 of 12 50-mile rides. By 2008, Envy was piling on the miles in a pattern that would carry her steadily throughout her career on her march to the Perfect Ten.

Any horse that accomplishes 600 endurance miles in one season (finishing 12 50-mile rides) could be said to have had an outstanding year. From 2008 onward, Envy has racked up from between 950 to nearly 1700 miles per year, starting to finish more consistently in the Top Ten each ride, and garnering an occasional first place finish and a Best Condition award along the way. 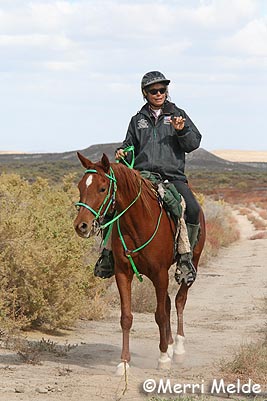 Envy excels at 50-mile multi-day rides, having done many of the XP Duck rides in the West and Southwest. She's completed 4 out of 4 75 mile rides, winning 2 of them. In the only 100-mile ride Ann and Envy attempted, they came in first at the 20 Mule Team in 2010 - and were pulled at the finish line. It was a cold, windy, rainy day as it can be in February in the Mojave Desert, and Envy's butt muscles stiffened up. She'd previously had some trouble with tying up issues during training rides, and upon advice of Callie Thornburgh, Ann changed Envy's diet. Now subsisting (amply) on grass hay, beet pulp, timothy pellets, and no grain (only a little senior and oats during a ride), Envy has never had a problem since.

The mare thrived on a busy ride schedule and did not require much in the way of training rides in between. Ann rode her with her neighbor Carol on the occasional 5 mile slow desert amble; and Ann's friend Cliff has for years enjoyed hand-walking Envy for 5 miles in the desert several days a week. 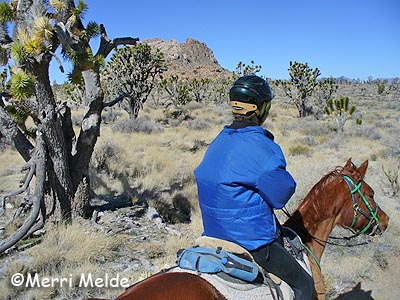 It hasn't always been easy, though. Although Envy doesn't dump Ann so much anymore by her spooking, she does "other things." Like trip. It was in the spring of 2014 at the New Cuyama ride where Envy was trotting up a road that had just been graded, when the worst happened. "She tripped over a rock sticking up, and lost her balance, then hit the berm, and she fell on top of me," Ann recalls. "I broke my clavicle, 3 ribs, had blood on the brain, and chipped my ankle. I was in the hospital 3 days, but I don't remember 2 of them at all."

But as most long-time endurance rider addicts (Ann has 25,000 AERC miles in 25 years of riding) have this gene that makes you want to get back to riding as soon as possible, Ann was back in the saddle 2 months later, finishing 4th in a 50-mile ride in Idaho's Owyhee Fandango. She credits her friend Cliff, who continued to take Envy out on 5-mile walks several times a week while Ann was recuperating, for keeping Envy exercised and loosened up. 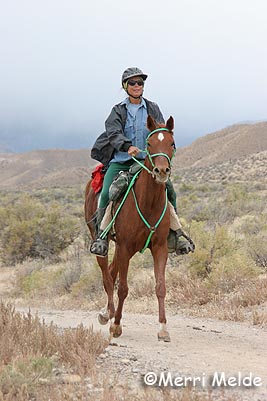 Ann, now 68, was nervous getting on her the first ride back after her accident - and she's still always a little nervous about riding Envy. In fact, Ann says, "She scares the sh*t out of me half the time. Oh, gosh, does she ever pull. In fact, she's gotten way, way worse the last couple of years. She doesn't know slow!

"She can be really bad coming in sometimes [to the finish]. There's rides where she's not controllable at all. Last year when we came to the finish at Death Valley the first day I rode her, I said, 'Anybody got a gun?'" Ann laughs. "It wasn't like I could let her go! She'd start bucking if I did. She's dumped me a lot of times, that's why I wear a vest!"

Saturday's 'Perfect Ten' ride may have been her scariest yet. "Envy was the worst she's ever been. Ever! I was absolutely terrified! I didn't know if I was going to make it," Ann says. "Along with constantly pulling on me, she was shaking her head. Every 15 to 30 seconds, constantly, she'd throw her head down, almost to the ground, almost yanking me out of the saddle, I can't believe I didn't come off!" Envy probably sensed the pressure Ann had been feeling in the weeks up to this final 'Perfect Ten' ride. "This was so built up," she says, "and I'd been so worried about this for weeks. I'd been a total wreck."

But when Ann made it to the finish line, many people were there to watch their final trot-out for completion. It was, after all, history being made. "Everybody cheered when we trotted out sound, and yes, I cried!"

Ann will now start to ease off on Envy's ride schedule - and take the time to get her hips replaced, something she's been putting off for years, riding with constant pain.

Callie Thornburgh, who was ride manager for the ride, was so proud that her friend Ann reached the historic milestone at her ride. Callie says, "We gave a little speech about it at the awards ceremony, about what the Perfect Ten is, what Ann and Envy accomplished. We all did the 'Hip Hip Hoorays' and stood up and yelled and screamed. "I feel very honored to be a part of her story. It's such an accomplishment. So few people have done it; it's something that takes a special horse and a special rider to even think about getting there. She and Envy are just incredible!"

For all Envy's quirks, Ann is overwhelmed with love for the tough mare. "She's just so amazing. I love her to death, and I don't know if she likes me or not!" Ann laughs. "But I think she does. She trusts me for sure.

"I'll do anything for her!" Ann actually has two Perfect Ten horses in her back yard. Pandora's Pixy was owned by Ann's long-time partner, Randy Coleman. Randy passed away in the fall of 2006. The mare is around 30 now.

Callie Thornburgh also knew Randy and Pandora. "Pandora was a cranky mare. She was one of those kind of horses that didn't want you to pet her or mess with her - just get on her, do the job, and leave her alone," she says.

"I still have Pandora. She hates me!" Ann laughs. "She always hated me; she used to kick me and bite me, because she was jealous of me with Randy.

"And I lost my Red horse last year; it just broke my heart. Pandora never forgave me for that, either. He was her best friend. Red was colicking, and I left for the vet with him in the trailer, and he died. When I came back, she was all excited to see Red again, but there was no horse in the trailer. It was so heartbreaking. She still hates me, because she thinks I took Randy away from her, and she thinks I took Red away from her.

"But I take really good care of her."
Posted by Endurance.Net at 8:29 AM

this is such a wonderful article . I had tears through most of it. thank you for sharing. I used to do endurance and miss it totally but due to money issues had to stop. I still ride 1000 miles a year but just pleasure rides. Also have replaced my fast trotting endurance mare with a gliding Walker mare, who I am sure could do endurance. keep sharing.