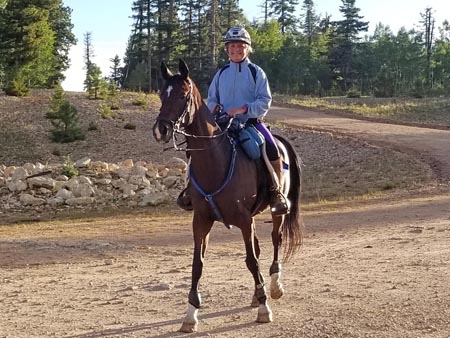 The 16-hand, slight bay gelding with a star and thin strip and 4 white socks is a familiar sight going down the Northwest and Mountain region endurance trails. But you might do a double take at his rider.

(You can read about Lee's earlier adventures with Malabar here.) 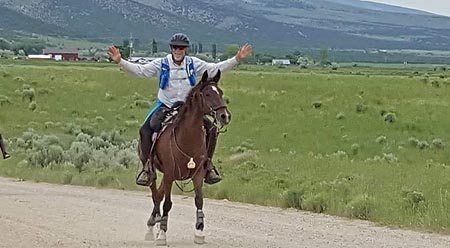 In 2015 Malabar and Lee headed to the Big Horn 100; they started the ride, and passed the first vet check, but then Lee stopped with him out on the trail because something wasn't right. Turned out Malabar had contracted salmonella, most likely at an overnight stopover in Dubois on the way; he became so ill that they nearly lost him at the vet clinic. He went on to recover, and Lee and Malabar came back firing on all pistons in 2016, with a 10 for 10 record, though Lee rode him more conservatively.

Now it's Lee's wife Naomi Preston who has the esteemed seat in Malabar's saddle. How she got there was a process of talking Lee out of him, since he had another nice and talented horse to ride (JAC Winterhawk), and since Naomi didn't really have a main endurance horse. "Maybe it was pity that he gave me Malabar," Naomi laughs. 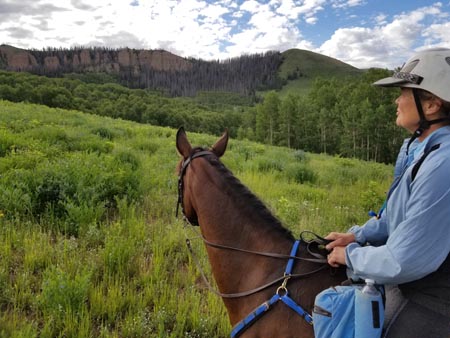 Naomi had ridden Malabar on only one previous 50 mile ride in June of 2011 at the Owyhee Cheap Thrills No Frills in Idaho. "It was a magical ride. Sue Hedgecock and I rode together the whole day. [Sue rode LZP Julioslastchance, her eventual Haggin Cup winner.] It was pretty, there were wildflowers, blue sky; the two of us just had a ball. And we decided to tie for the win, because the horses were even. It was really fun." Naomi had never ridden Malabar before, and the gelding was perfect that day, since Lee had gotten the 'kinks' out of him in winning the previous day's 50. 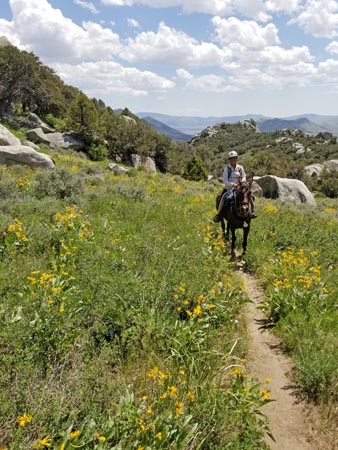 Naomi and Malabar at City of Rocks
Fast forward 6 years to Idaho's City of Rocks Pioneer ride in June of 2017, where Naomi swung a leg aboard Malabar in a new partnership. Usually riding with Lee aboard Hawk, Naomi and Malabar finished 16 of 16 rides (810 miles) in 2017 (and don't forget the 2 rides and 100 miles with Lee before Naomi took the reins), and 18 of 19 rides in 2018 (940 miles). Their only stumbling block in 2018 was Tevis, and that was a Rider Option pull, when Naomi's metabolics went awry. "Malabar was fine," Naomi said. "I was the weak link!" (Lee and Hawk went on to finish Tevis.)

"Malabar's showing no signs of slowing down," Naomi says. "It's almost like he's got a second career. We got 4 wins and 4 Best Conditions this year.
We tied for the win of the 3-day Strawberry Fields Pioneer with Lee and Hawk - only 3 pairs did all 3 days. Very tough ride. And Malabar reached 7000 miles in September. 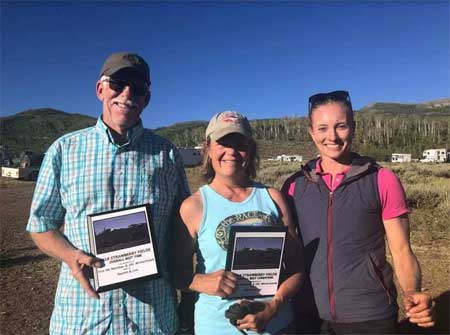 "We weren't pushing or anything - Malabar's just kind of on fire. He's just going so well, and his recoveries are great."

On one of those wins this fall, Naomi and Malabar tied with Christoph Schork and GE Pistol Annie at the Outlaw and the Virgin Pioneer ride in Utah. Christoph is AERC's winningest rider, and you can usually expect Christoph to be setting a smart pace at the start of rides and finishing in front. And GE Pistol Annie is no slouch, with 48 completions in 49 starts, 33 of those first places (all with Christoph), and 21 Best Conditions.

Naomi says, "We came into the lunch vet check, and I thought, well, if Malabar doesn't pulse down right away, this will be a sign he's going too fast. And they both pulsed down at the same time; Malabar of course drops to 40. Christoph and I rode together the whole day, and we had a ball."

Naomi recalled that Lee and Malabar had ridden with Christoph and Pistol Annie many years earlier. One can easily imagine the two experienced, talented endurance horses eyeballing each other in mutual recognition down the trail. 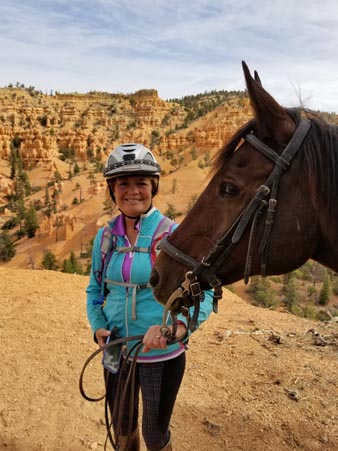 Known in his 'younger years' for some antics - spooking, bucking, going too fast - Malabar tried his tricks on Naomi just once, on her first ride with him in 2017 at City of Rocks. "We were going down a long road, and something spooked Malabar, and the wind was blowing a million miles an hour, and he took off at a gallop. So not only did he spook, but he bolted, too. Lee was thinking I was going to be roadkill, but I stayed on, and got him stopped.

"That's the only time he's really ever done anything kind of crazy with me. I was really fit and strong then. I wasn't getting off that horse. Luckily he just ran straight. But it did scare me! "He's really settled down. I love riding him. It's just fun. We're in that zone. He reminds me a lot of riding Mustang Lady in several ways, just because he's a veteran, he knows to eat and drink, he carries a steady pace - he knows all that stuff. You know how nice it is riding a horse that's experienced."

(Naomi's phenomenal Mustang Lady entered the AERC Hall of Fame in 2001 - read about her here). Experienced and, still, on fire. Malabar probably is getting a 'second wind' with a Lightweight rider, but it could just be that he's that good. He comes from some of the best old-time, proven bloodlines you can find in the endurance sport: Fire Mt Malabar is by Jim and Jackie Bumgardner's legendary endurance stallion and sire Sierra Fadwah (AERC Hall of Fame 1992) out of Malabar Dawn, by Malabar Amir.

While the gelding is (mostly) all business on the trail now (mostly, unless Naomi tries a side pull on him after a lunch vet check at a ride, which he does not like), he can throw in a little crow hop on training rides. "It's not anything that you'd fall off," Naomi says, "but a crop hop that says, 'I'm feeling good!'" Generally kind of aloof to people, Malabar still knows he's quite special, coming to the pasture gate when Lee or Naomi are around, to get let out for his "special" meals. He thinks any hay on the ground is his bed. He has a bit of a sense of humor, too, taking advantage of Naomi when she's trying to put his bridle on. He puts his head in the sky because he knows that he's tall and Naomi is short and can't reach him when he does that. The only horse in the herd he can't push around is his brother Fire Mt Legacy. Malabar knows how good he is. And he's not done yet. Lee and Naomi are planning on more multi-day rides next year, which Malabar excels at. "Lee and I really love multi-days. And we really love the Duck rides (Dave Nicholson's multi-day XP rides). The trails are beautiful, we get to see different scenery, and the camaraderie is great.

"Malabar's just that special quality of a horse that knows their job, and has fun doing it and you don't have to worry about them. It's just the ultimate. 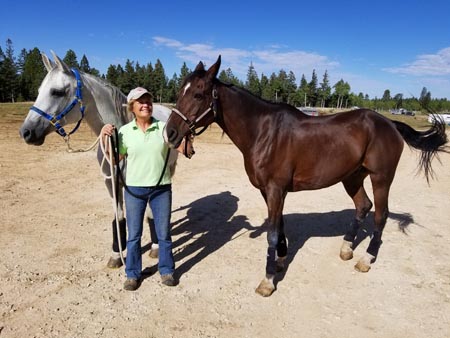 photos by Lee and Naomi, and a few by Crockett Dumas

Posted by Endurance.Net at 8:46 AM