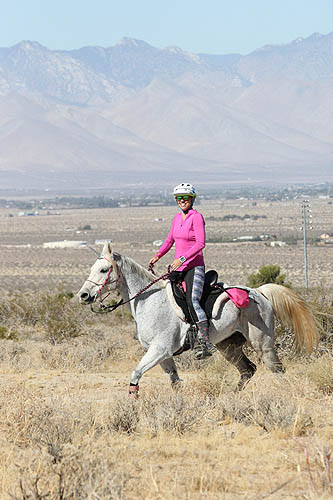 Any time you’re around Heather Reynolds when she’s riding ASuddenGift MHF, you’re likely to hear a version of this: “He is my favorite horse! I love this horse!”

Heather first laid eye on “Sudden” at a racetrack in California as she was shopping for potential Arabian endurance horses. “I never got his name, and I never saw him outside of the stall, but I really liked the look of him.” But he was too short; the Reynolds prefer horses 15.2 or taller to buy and re-train and re-sell, as that’s what a majority of endurance riders prefer.

Fast forward six months, and Heather saw a 15.2-hand gray horse for sale on Facebook that she really liked the looks of. She bought him sight unseen. “He arrives,” Heather said, “and he comes off the trailer and I thought, oh my gosh, he’s so little. He was lucky if he made 14.3 hands. And then I took a closer look, and I thought, this is the same horse!”

ASuddenGift MHF is by Sudden Mischief, a stallion that stood at Michelle and Dr. Mickey Morgan’s Mandolynn Hill Farm in Texas. The dam, AER Wiqueen, by Wiking, was owned by Longin Blachut, and he’s the breeder of ASuddenGift MHF.

All started out well on Sudden’s endurance career with Heather, and he was happy to start going down the trails. But after a couple of rides, his back started getting sore. After he and Heather did their first 50 together, the whole length of his back, from withers to loin, was swollen and had a lot of heat radiating from it. After a few days he recovered and went back to training. Heather switched saddles. But Sudden’s back issue continued.

“It would vary from decent to absolutely debilitating,” Heather recalled. She tried 15 different saddles. The Reynolds (Heather and her husband Jeremy comprise Reynolds Racing, based out of Dunellon, Florida) tried a variety of things. “We had accupuncture treatments, chiropractic Treatments, thera-plate sessions, tried injections in his back, we also did ground poles and collected work, nothing really helped him.

“His back would get so sore that he would show lameness in various limbs. It was never an injury; he’d be lame, then he wouldn’t be lame within an hour or so, but his back would be horrifically painful.”

The Reynolds asked every new veterinarian they encountered, telling Sudden’s story again and again. One vet Xrayed him and diagnosed him with kissing spines. The Reynolds gave Sudden the entire summer off, and his back was just as sore after 3 months off as it was before. “So then I brought him into the clinic to have the surgery for kissing spines, and the vet that was going to do the surgery re-Xrayed him, and said he didn’t have kissing spines.

“We even had a specialist down from southern Florida who does all the top end dressage and jumping horses. She came up and ultrasounded and Xrayed his entire top line and even did a rectal ultrasound of his S.I. (sacroiliac). I mean, we went as far as we could go to try to figure him out.” 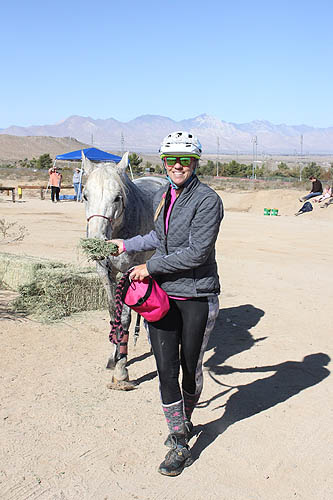 Then after about 4 years of trying to figure out Sudden’s back issues, at South Carolina’s Broxton Bridge ride in January of 2018, Heather told yet another veterinarian (this one from South America) the story.

“She said, ‘Whether it seems like he has it or not, just treat him for EPM.’” Equine Protozoal Myeloencephalitis is a neurological disease that results from ingesting the Sarcocystis neurona or the Neospora hughesi protozoan from contaminated feed or water. (The oppossum is the main host for the protozoa.) Typically it penetrates into the gastrointestinal tract and enters the bloodstream and central nervous system, and horses usually exhibit hindlimb weakness, muscle atrophy, and incoordination. Without treatment it can progress to severe symptoms in hours, or years, and is largely diagnosed by clinical signs supported with serological testing.

Heather was taken aback. Sudden had never presented with any of the classic symptoms of EPM. “He’s always been super muscular, not atrophied anywhere, super coordinated, very ambidextrous; but she said it didn’t matter. Just treat him. He might not even have EPM, but those drugs sometimes fix back issues. And she said if we got results within 4 days, the drug was working.

“What did I have to lose? I ordered the drugs and treated him. And it was like magic. On day 4 his back felt fine. At 10 days he was great.” The Reynolds treated him again a few months later, and he was drastically better.

Since then, Sudden has lived up to the potential Heather knew he had. Returning to the endurance trails late in 2018, the 11-year-old gelding had no back issues, and he completed 2 50-mile rides. In 2019 he finished first in two of his five ride completions. He and Heather attempted his first 100-mile ride in the Tevis Cup; he finished fifth but was pulled for foot lameness at the finish line because of a boot malfunction. That didn’t diminish Heather’s enthusiasm for Sudden. She said afterwards, “I am so excited about this horse. His attitude was excellent, he took care of himself as well as me. Best of all his back is 100%. I am very proud of my horse. His first 100, he crossed the finish line in 5th place and he was darn close to completing. This also validated why I’ve kept this horse and worked through his issues for so many years. He is my favorite horse.” 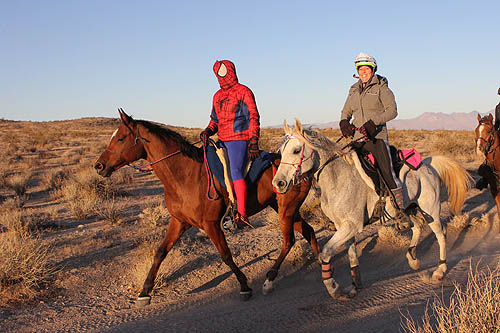 Sudden’s next ride was the 50-mile AERC National Championship in Ridgecrest, California on October 31st, where he placed 6th, 13 minutes behind the winner, (and Heather was first Lightweight), and received the Best Condition award, a validation of years of frustration, perseverance, and ultimate success.

(And two weeks later, the pair finished second by a race-off nose in the 75-mile USEF Regional Championships in Florida.)

“Most people would probably not still own this horse,” Heather said. “But if he hadn’t been sorted out, no one could have really used him. And I liked him so much, it was a big fear of mine that he’d end up just being put down, because he would not be a useful riding horse.

“I love this horse! He’s always happy and willing. He’s always got that little twinkle in his eye, and he’s just ready to do whatever it is you’re asking him to do.” Sudden, happy to wear a Halloween costume as a Unicorn carrying a Princess, in the AERC Nat'l Championship 50

Posted by Endurance.Net at 9:05 AM