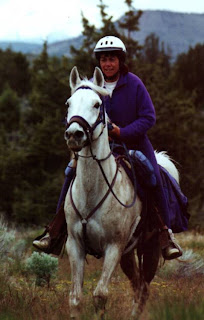 Me: “Well yes sometimes we do. It depends on the problem.”

He gave me a long drawn out “Well” and he took a deep breath, “he bucks.”

Thinking that can’t be all, I questioned. “And?”

“He is also hard to catch. My girlfriend can catch him but I can’t get near him.”

“Alright” I answered, “What type of horse is he?”

“Oh he’s six years old, grey A-rab. I don’t want to sell him to the meat plant but he is a handful and you folks were recommended to me.”

After a few more details bounced back and forth I said I'd come have a look. The next day I was headed to LaPine to look at what was probably going to be our next winter project. at that time we often bought these horses, put a lot of riding on them and made a good horse out of them again. We resold them in the spring or summer, whenever the horse was ready. We were thankful to be able to rescue these horses from what could be a terrible fate.

The hopeful seller came out and pointed me to the corral. Standing there was one shaggy, a bit thin, ewe necked and sickle hocked gelding. I scowled inwardly and pitched a little rock in his direction so he’d trot. I grinned inwardly at the result, it was actually a “wow” at a very floaty smooth efficient movement. We entered the corral as we chatted and the horse eyed us warily and took off.
As I watched the horse I was told “His name is Zapped, but I call him Bolt.”

“Bolt.” I replied looking from the horse to him.

Posted by Endurance.Net at 9:31 AM