Cindy Collins and the Big Horn 100: The Magic Ten 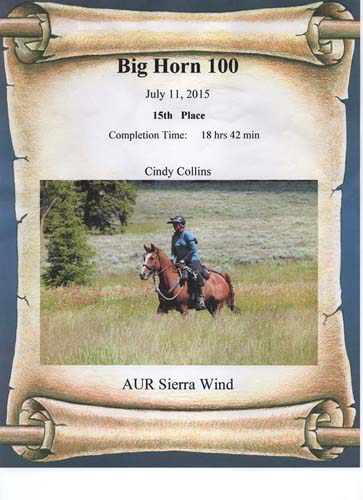 When Cindy Collins rode across the finish line of the 2015 Big Horn 100 endurance ride near Shell, Wyoming, a little before 2:00 AM on July 12, after 18 hours and 42 minutes in the saddle, she collapsed into the arms of Melanie Thompson, her crew, and cried. To be sure, part of it was from a bit of pain and fatigue, but it was mostly from the momentous jubilation of it all. It was Cindy's 10th completion of the legendary 100-mile endurance ride, a feat only 4 other riders have accomplished in the ride's long and storied history over 40 years. "Melanie pretty much dragged me crying off of my horse," Cindy said. "It was a very emotional ride, for a lot of reasons."

Reaching 1000 Big Horn miles in the 100-mile distance has been a long term goal for this 60-year-old veteran endurance rider from Cody, Wyoming, who has logged nearly 10,000 AERC miles over 30 years of endurance riding.

And she owes it all to the Big Horn ride. "Back in 1979, there was an ad in the Cody paper about a meeting in Graybull, Wyoming, about the Big Horn 100 mile horse ride," Cindy recalled. "My husband had just bought me an unbroke 3-year-old Arab gelding. I had heard that Arabs were good at endurance, but that was the extent of what I knew. So I went to that meeting, and I met Tom and Arlene Van Gelder, and many of the other people who started the Big Horn 100, and that was really my start of my lifelong love affair with endurance riding."

Cindy's first two endurance rides were Limited Distance rides, in Mississippi and Alabama in 1980, due to the fact she and her husband had to move south for a couple of years. Back in Wyoming, Cindy did her first 50 - the Big Horn 50 - in 1981, beginning a decades-long journey over "the most beautiful trail in the world," with memorable people and horses and adventures along the way.

She finished the Big Horn 100 for the first time in 1984 on a borrowed endurance horse owned by Tom Van Gelder. "I had a really good endurance horse, but he was really good at 50s. He wasn't a great 100 mile horse," Cindy said. "So Tom gave me a gelding that he owned that he felt he was too heavy to ride. 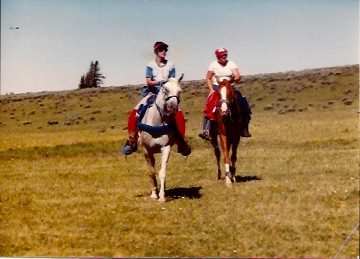 "Actually, it is a great story. This was the year I finished with my leg in a cast. They had a calcutta betting on whether or not I would finish. My cast was cutting into my leg so badly I had blood running into my boot, so Tom Van Gelder and Richard Hickstein were using a hoof knife to modify the cast while my husband took care of my horse. My foot was broken in 5 places and I brought my stirrup into my ortho doc, and he built my cast for riding the Big Horn with my foot at the correct angle. I finished the ride, but of course, we destroyed that cast completely and I had to get another one the next week."

"I really had the bug then!" 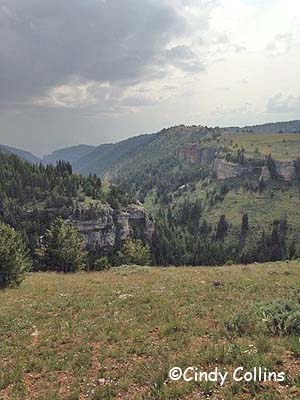 She finished on FM Fad Serene in 1991, had an unplanned and unwanted break in endurance from 1993-1997, then finished in 1998 on Serya Robask, both borrowed horses. She finished it again in 2002 (for the 7th time) on her mare Sagebrush Nellie, "a really good, consistent horse."

Cindy is sure that pair would have finished two more times but for those misadventures along the trail that sometimes happen. One year, they lost a stirrup in the first section of canyons. Despite 5 people helping to look for 20 minutes in the waist-high sagebrush, the stirrup was never found. "I'm not one of those people that's good enough to ride really well with one stirrup, so we were overtime when we got to the Vet Check."

The other time was when she and riding companion Frank Solano caught up with a gal as they were coming to the canyons approaching dark. "She freaked out on the canyons, and she got off her horse and sat in the trail and wouldn't go. We just couldn't leave her there. We kind of dragged her and finally got her into the last vet check, but we were overtime."

There was a long gap between Cindy's seventh Big Horn 100 finish in 2002, and her next one. She participated in very few rides (and not the Big Horn) from 2004-2008, due to either health problems, or not having the right horse. Luck wasn't with her when she returned to the Big Horn trail from 2009 to 2012, with results being a metabolic pull, two rider option pulls, and a completion on the 60 miler instead of the 100. "The hardest thing was that stretch from 2003-2012. I started thinking that I just wasn't a 100 mile rider any more. It was very depressing," she recalled. 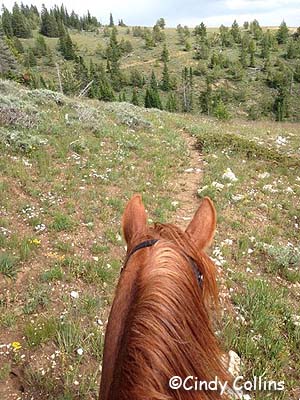 And this year's completion would not have happened without her crew Melanie Thompson, her husband Keith, and her good friend Angie McGhee.

Last December, Cindy fell and had to have major knee surgery. It healed pretty well, and she managed to get through 2 50-mile rides in May, so she figured she would be able to ride the Big Horn 100. Or, as she puts it, "I figured I could gut my way through it."

Her knee did hurt. She did have to gut her way through the ride. But her knee wasn't the major problem. "If you hurt one thing at my age, there's all these repercussions on the rest of your body that you don't even realize, all these biomechanical things. About three years ago I had torn the peroneal tendon in my ankle, and nursed my way through that, and got it rehabbed. You know, it's there, but it was pretty good. I think something in the way I was holding my body during the ride - my leg, and my knee - must have aggravated that old tear in the ankle, and it started tearing again. And by about 60 miles, it was really, really starting to fray," she laughed, though it wasn't funny at the time.

"The ankle was extremely painful, and it would literally collapse on me as I was posting, and it hurt really bad when it would collapse, because it would rip that tendon."

Angie McGhee, from Wildwood, Georgia, riding the Big Horn 100 for the first time, aboard Suzanne Solis' horse ALA Thor, was riding with Cindy, but would not leave her behind.

"I begged Angie to go on," Cindy said. "Both our horses easily could have finished two hours faster, absolutely no doubt. But Angie would not leave me. She stayed with me and she opened 25 gates, and she's about 5 foot tall and she was on a 15.2-hand horse."

Angie confirms this. "The challenge there for me wasn't the size of the mountains. It was the number of gates and the size of Thor! Thor is a TRUE 15.2 hands, and I am 5 feet. I rode with Cindy who, in most people's books, should still have been on medical leave for knee/ankle problems and couldn't mount from the ground. I think there were something like 28 gates, and I opened 25 of them." She added with a grin, "It would have been very convenient though if she had been on Thor (she's tall!) and I had been on her little mare." 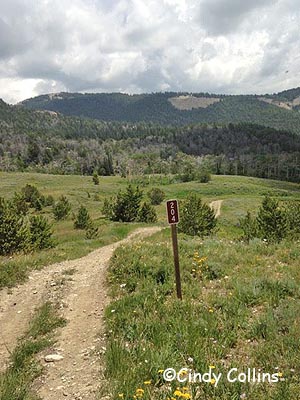 Cindy said, "We even got down to the point where Angie would say, 'We're going to trot 10 steps and walk 20'. But we finished the ride in mid-pack, and our horses looked great, and they truly could have gone a lot faster. I have a really, really fantastic mare, truly. That made a huge amount of difference. She's pretty special."

It's sometimes hard to put into words exactly what it is that keeps people coming back again and again to the challenging, arduous, isolated Big Horn ride, but Cindy has the words. "I've ridden a lot of places, and I just think it's the most beautiful trail that there is. I also think that there aren't many single loop 100 mile rides left, and I think that also makes it something really special.

"Tevis has 500 volunteers. We have 20. On a good day! It is extremely remote, through the whole thing. It's very rugged, and it has very limited help, and I think it's more 'Old School' endurance.

"I think our vets root so hard for the riders, and try so hard to try to get everyone through safely. Here you really feel like it's very personal, and they really want you to finish, and they really care about you. And I think it's a warmer feeling, because it is such a small group, that surely by the end of it, everybody knows everybody.

"The Big Horn just has a tremendous amount of sentimental value to me, I guess. It's just something that I love.

"It's been a loooong, looong goal! I do owe this finish to Angie. She was a very very good friend."


**The Big Horn 100 is one of the original, traditional, most beautiful, arduous, single-loop 100-mile rides in the country, and a silver Big Horn belt buckle is most coveted. Read more stories, and see photos from the Big Horn rides here:
http://www.endurance.net/international/USA/2015BigHorn/ 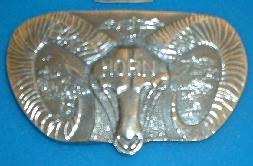 Posted by Endurance.Net at 8:00 AM

Unknown said...
This comment has been removed by the author.
3:27 PM

Unknown said...
This comment has been removed by the author.
6:06 PM

Thank you, Merri, for the lovely article. No one spends 35 years in this sport without the kindness and support of many people and the heart of many gallant horses. Being the 5th person to receive 10 BH 100 buckles is an honor. I want to acknowledge the four people who achieved this goal before me: Regina Rose, Kathy Arnold, John DiPietra, and Barb Seiker.