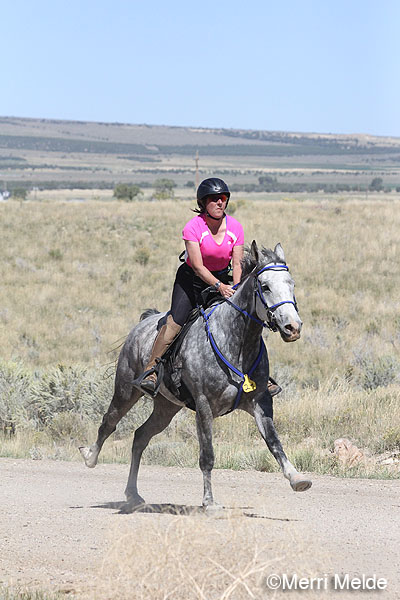 Gwen Hall, of Woodland Park, Colorado, and the 15-year-old Arabian gelding Sizedoesntmatter (“Dakar”) already had an impressive resume before tackling this year’s AERC National Championship 100-mile ride outside of Ashland, Montana at Fort Howes on June 7: three Top Ten finishes in the Tevis Cup (4th in 2014, 2nd in 2015, and 8th in 2019); a first place in the 2017 AERC National Championship 100 in Colorado; USA team starters for the 2018 World Equestrian Games Endurance Championship in Tryon North Carolina; AERC Decade Team.

They’d won the Fort Howes 75-miler in 2017, and finished 2nd on the 100 in 2019, so they were familiar with the usual course; but this year things were different. Ride manager Jan Stevens had to change some of the regular loops, and, the weather was hot.

The 50-mile Championship, run on Thursday, June 11, was pleasant, but a heat wave hit for Saturday’s ride. Described by several riders as ”HOT" and "a brutal heat wave" and “absolutely brutal” and "incredibly hot" and "extreme heat," the weather conditions were a big contribution to the high pull rate (of 44 starters in the Championship 100, only 13 finished).

While the heat did have some effect on Dakar, Gwen and her gelding still won by almost 1 1/4 hours, in a total ride time of 13:14. Coincidentally, Hannah Johnson and Kourageus Hope (“Stuart”) finished second, just as they did to Gwen and Dakar in the 2017 Colorado Championship.

“It was a tough ride, not the flat and fast course that I think a lot of us had done in that race before,” Gwen said. “There was a lot of technicality to it.”

While 7 of the 13 finishers were from the Southeast and were used to heat and humidity, living at 8500 feet in Colorado was likely a bonus for Dakar, even though Gwen was concerned for him. They’d had no heat acclimation/training - they had frost on the ground at home as recently as 10 days before the race.

Gwen and Dakar started the 100 out in the front, with Jeremy Reynolds and Richard Ferrari. Jeremy was pulled after loop 1 and Richard after loop 4; the next 40 miles Gwen and Dakar did solo, “just another layer to the day’s challenge.” It was getting very hot, and Gwen was cooling both herself and her horse at the water stops on trail. “We toughed it out, walking all the steep/longer uphills/downhills and stopping to graze at several points along the way. We were able to slow down since the heat was taking out horse/rider combinations at an amazing rate.”

Gwen was very conservative with Dakar on the final 14 miles, finishing just before dark. “I was a little worried because he was showing a little tightness in the back end before we went out [for the final loop], although he was showing less than I was! But I didn’t want to jeopardize anything, so I literally got off and led him up all the longer steeper hills. I led him on the downhills. I jogged with him down the road coming in, trying to help him out as much as I could. I really thought we could be giving back a lot of time here, but I felt it was necessary, because you can’t win if you don’t finish!”

Gwen used some of her knowledge gained from the disaster of the Tryon World Equestrian Games Endurance Championship fiasco they participated in, to help get Dakar through the Fort Howes ride. 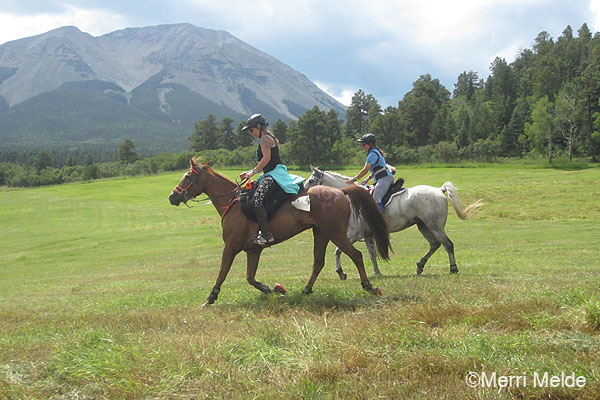 Gwen and Dakar follow Hannah Johnson and Stuart, en route to a win in the 2017 AERCNC 100 in Colorado

She and Dakar had started with her team, but officials messed up the start, and decided they would re-start the ride as a 75-miler. Then during the second loop, Hurricane Florence hit. “I have never ridden in a deluge like that in my life. It was like someone was shooting a fire hose at you sideways. It was the worst rain I have ever been in.

“And then of course the heat cranked up, and the horses started dropping like flies. It was probably 90 degrees and 95% humidity.” Dakar sank to mid-cannon bone on parts of the course in a mix of sand and clay. “I walked it. I didn’t want to hurt my horse.” And then the officials stopped the ride. “In some ways while I was disappointed they stopped the ride, from a welfare standpoint, I was glad they did, because I do think the attrition rate would’ve been worse.

“I'd had no experience riding in heat and humidity like that. I cannot express my gratitude enough to Valerie Kanavy. She opened up her home to me for the 4 weeks before we went and staged at Aiken. She let me live with her, and I trained with her and her horses. She had 5 horses going to WEG, 2 for the US team and 3 for other riders.

“And she was always very open with information, like ‘This is what we’re doing here.’ And while you’re always hesitant to change what’s been working for you, it opened up my eyes a lot to what I can do and what I should do.

“And that information, what I learned there with Valerie, directly translated into some of the management things that i did for this particular Championship race with the heat. And it was obviously very helpful."

And Gwen and Dakar couldn’t have won without the support of a crack crew. “I could not have been successful without the help from my crew, [my husband] Tim, Cassadee Jaksch and her mom Claudine as well as the support and encouragement from so many friends. I cannot tell you how much it meant to me.”

And the heroics of Ride Management did not go unnoticed by this grateful competitor. 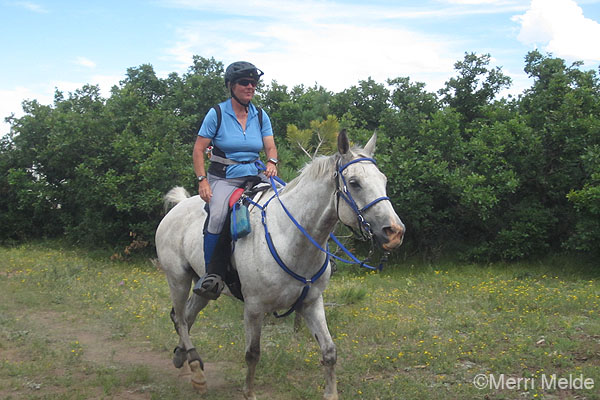 “Ride management did an incredible job given the number of events, the normal challenges presented by managing a ride of this size and the particular challenges posed by the weather.

“[They] did a great job with the last minute changes (trail loop changes, light marking on trail, etc) and the vet team was amazing - I am not sure they slept much at all since vet in started Thursday.

“They were the real endurance champions of the weekend.”

Posted by Endurance.Net at 7:13 AM