How to get to the World Equestrian Games 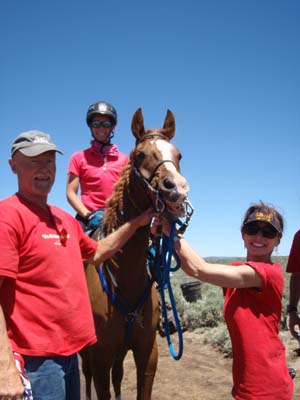 His face took a more reflective cast as he acknowledged his good
fortune, "He's a once-in-a-lifetime horse."

After my burst of enthusiasm, I felt a twinge of unease. Several horses I had been rooting for were already out of the ride. I glanced over at Monk, who was standing, one hoof cocked, outside the EZ-up canopy that sheltered his crew from the high desert sun. He had the physical attributes - a deep chest, short back, a strong hind end, straight, well angled legs and sturdy feet - a structure that had carried rider Lindsey Graham through the first three loops of the selection trials for the US Endurance team for the Western region. No obvious reason to worry there.

"The hardest thing is finding ways to get him fit," Chris said. He ponies Monk off a Quad, but that alone isn't enough.

Unlike a racetrack conditioner, Chris is not limited to workouts on a
level surface and uses the steep hills near his home for mounted
workouts too. "I'm 190 pounds," he pointed out. Even so, he has
trouble driving Monk's heart rate up into the zones that are
considered cardio-building. He has done most of the conditioning on
Monk, hauls him to rides, takes pictures and promotes him through his
blog - a combination trainer and stage dad...