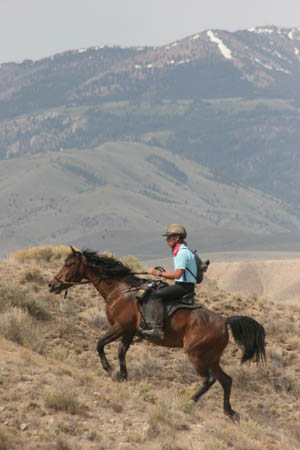 They were a common sight in the Northwest for over a dozen years: the mustached rider with the reins double wrapped around his gloved hands, and a plain dark brown bay roaring down the trail with his head in the air, trying to go faster than his rider wanted.

Idaho's Tom Noll had gotten it in his head in 2002 that he wanted to do endurance, but he didn’t know how to ride. He bought Frank - the unpapered horse once owned by Wayne Newton (maybe) - in 2002, and Frank taught Tom how to ride.

And Tom Noll and Frank did it all together: over 5000 endurance miles, Tevis, the Big Horn 100 (3 completions together, including a first place and Best Condition), Best Condition 5-day horse at the Owyhee Canyonlands, the Pony Express Trail on the 2011 XP, and Decade Team.

I first rode with Tom and Frank in 2008, one of those rides where Frank was pulling Tom along quite insistently, incensed at Frank's perceived slowness of our pace. Tom had said, "I started him on Adequan shots a while back, and they took 5 years off his life. Maybe I shouldn't have done that!" We decided if Frank wrote a book, it would start out like this: "All I ever heard out of Tom's mouth was, 'Slow down!'" The title of every chapter would be, "Idiot!" Have you seen the made-in-southern-Idaho movie Napoleon Dynamite? Frank, we imagined, uses the same tone of voice calling his rider "Idiot!" when he wants to go out front, and when he wants to go faster, the opposite of what Tom wants. We imagined that Frank uses this word quite often.

My horse Frank died late in December. Anyone’s best guess is that Frank was nearly 30 years old. Frank was an outlaw horse from Wyoming with no papers and an unknown past. His breeding looked to be Morgan perhaps mixed with some Arabian. Frank showed the look of eagles. Many of you remember Frank and I am not exaggerating when I write that Frank was a legendary horse.
Frank ran 100s and Frank ran multi-days. Frank’s signature trail was the Big Horn 100 but he also finished Tevis and he finished the National Championship 100. Frank last ran the Big Horn in 2010 for the 40th Anniversary of the Big Horn 100. Frank and I traveled across the west on the Pony Express Trail on the 2011 XP. Frank was an AERC 5,000 mile horse and Frank and I were a decade team.
Frank never turned away from difficulty. I never had to ask for speed – all I had to do was relax and let Frank go. Frank’s only questions were “how far and how fast.” Frank was forward but Frank was a true gentleman and Frank was humble. Frank had nearly 6,000 AERC miles with one pull and one overtime finish.
Frank’s record is significant but the numbers do not tell his story. Frank and I were partners in every sense of the word. We trusted each other completely. We were brothers of different species but we were cut from the same cloth.
Frank taught me how to ride, and together we saw some of the best parts of the west. I spent thousands of hours on the trails with Frank. On those trails, we met many riders and horses and we made many friends. Together, we saw wild horses and we saw wild lands. We shared the sun, and the moon, and the stars. We shared sunrises and sunsets. We shared fair weather and fierce storms, sweltering heat and bitter cold. We shared red rock deserts and high mountain passes. We also shared love and beauty. We shared our thoughts and we shared our innermost feelings. Frank showed poetry and magic to me. At certain moments time stopped and a mystical door opened, and we traveled together in another realm of consciousness.
Frank was my best friend. Frank offered help when I faced difficult times in my life. Frank never complained and he never asked anything of me until the very last moments of his life. In those last moments, Frank’s eyes looked to me and Frank asked for my help. I honored Frank’s request as we both faced that most difficult decision together. In my heart, I knew. I placed my hand on his forehead, and Frank was gone.
I am sad because I will never see trails through those two pointed black ears again until it is my time to cross the rainbow bridge and our spirits meet. Frank was my best friend and I love that little bay horse.
From my heart,
Tom Noll

One of the most beautiful tributes I have ever read. I had a horse like Frank once and we should all be so lucky. There are no words, only the hope that as the days pass, the loss you feel will be filled with all your wonderful memories and knowledge that he is not in pain. He had a very full and successful life because he had you as a partner. RIP Frank.

Tom,
What a beautiful soul, so evident in your photos of Frank. He is a once in a lifetime horse, no other partner will be the same but I hope there will be another you may connect with on a new level. Cherish all he taught you and honour him by being even better with those who come to your barn. So sorry for your loss, it is so difficult to lose your anchor, your rock.
Rosemarie Bahr

You're going to miss him, but oh to have had him will make you smile. Wendy B.

That's a beautiful story. Sniffling over coffee in Hertfordshire, UK.