Racehorse to trail horse – 800 Miles on the Arizona Trail 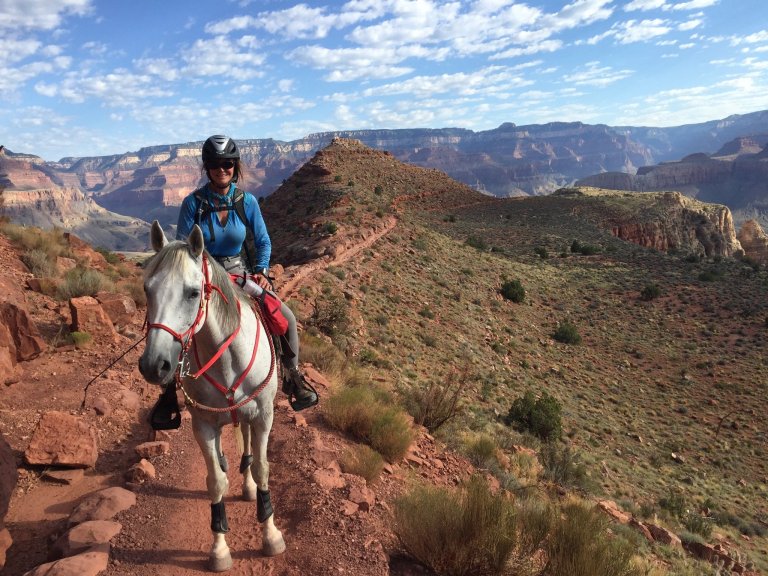 21 August 2016, Arizona ~ Carol Fontana riding Tiki Barber completed the final segment of a remarkable ride on 15 August 2016, finishing the 800-mile Arizona Trail with the ride down the North Rim of the Grand Canyon in Arizona to the bottom, then up the other side to the South Rim.

“I rode the entire Arizona Trail solo and my husband served as my crew with occasional help from friends,” said Fontana. “We began at the Mexican border near the Coronado National Monument. \We were on the trail about 2-1/2 months, although it took about 4 months all together as we had to return to Prescott several times for personal matters and had to wait out wildfires on two occasions plus some monsoon rains. I saved the grand finale for the Grand Canyon, and it was a perfect way to end it. Of course, the views are astonishing, particularly at sunrise and sunset. We saw both.”

“To avoid the heat of the day, I often rode very early,” Fontana explained. “In the case of the GC, I started at Kaibab North Rim in the late afternoon and arrived at Phantom in the evening. I got a bit of sleep on a picnic table at a private horse camp with hitching rails. No corral unless you are a mule. We left at 5:00 a.m. and arrived at Kaibab South Rim at 9:30 am...”