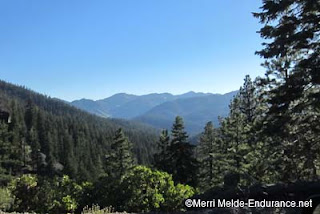 This year's Tevis Cup was different from the beginning - it seemed quiet, less frantic… a bit subdued. Last year when we drove into Robie Equestrian park in the Tahoe National Forest - basecamp for the start of Tevis - with a horse trailer Wednesday evening (Steph and I were crewing for Nance Worman and the Levermann girls), we couldn't nab our usual place to park in the Back Forty, because everywhere was full of rigs. 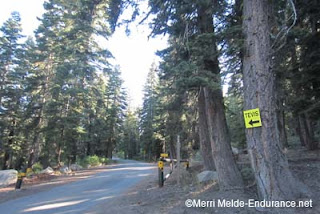 This year, driving into Robie my car on Wednesday evening, I saw a whole two, count 'em, two parked trailers. In fact, I wondered briefly if I had arrived for the right weekend. 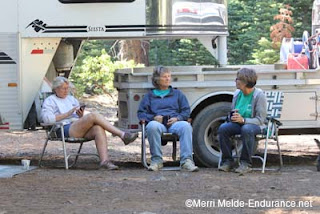 In the Back Forty I found who I was looking for, Suzy Hayes from Montana with her gorgeous 16.1-hand Anglo-Arabian gelding Greenbriar Al Jabar. I camped beside Suzy and her crew Lynn Lee and Ona Lawrence, because I knew I could bum hot water from them in the mornings for my coffee! 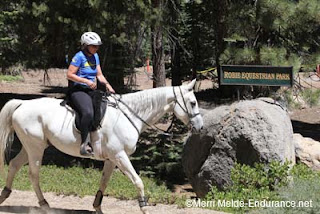 "Atlas" looked rather stunning, all big and white and flaunting rippling muscles when he walked. With a carefully orchestrated record of 33 finishes in 34 starts over 8 seasons, (all but 1 finish in the Top Ten) and 8 out of 9 100-mile completions, including a 9th in Tevis last year, Atlas and Suzy were fresh off a 2nd place finish in the Ft Howes 75 miler in June. The 13-year-old looked fit and ready.

Oh yeah, that 9th place finish in Tevis last year? The trail opened up beneath Atlas' feet before Red Star at 28 miles, and he fell down, cutting himself up, ripping a hind chestnut off, leaving himself all bloody and holding the hind leg up. He walked it off, and in fact did not appear lame at all. He stayed sound all day and went on to finish 9th. Never mind Suzy had broken a couple ribs. "He was sound so I wasn't going to pull!" she said, rather nonchalantly. 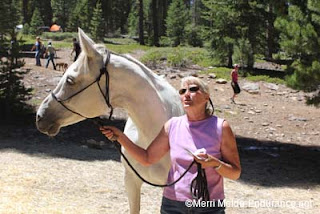 They came this year loaded for bear, though Suzy was realistic about winning Tevis. "I've never even thought about winning Tevis, though it'd be thrilling to win the Haggin Cup [Best Condition award]," she said. "I like to stay on the safe side of the 'red line.' We go do our thing, and it depends on what everybody else does. He's as fit as I can get him. I've got a good horse; we'll see if he's good enough. Now the luck kicks in. You'll see if you have good luck or bad luck."

Suzy has nearly 23,000 AERC miles, a horse in the Hall of Fame and Pard'ners Award (Kootenai Zizzero) and 5 Tevis buckles. She planned to ride with Tony Benedetti (8 Tevis buckles) and his 10-year-old gelding FV Abu Antezeyn.

Very few people had pulled into Robie Park on Thursday, and not until around 10 AM on Friday did the trailers start rolling in. It seemed so subdued, and I wasn't the only one who noticed.

It had to be the glaring absence of a person who's been such an integral part of endurance riding and the whole Tevis ride experience since his first Tevis finish in 2007. Kevin Myers took his life less than a month earlier, leaving so many of us with desperately shattered souls in his wake. His absence left a huge, glaring hole many of us tried to fill with tears and hugs and good memories throughout the weekend. All of Kevin's friends - and he had so, so many - all rode emotional roller coasters of despair, and of joy in each other's company over the weekend. 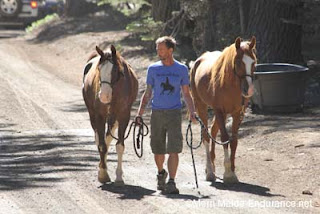 Kevin's partner Rusty Toth would ride, for the first time, Kevin's horse Auli Farwa ("Far"), a 16-year-old bald-faced chestnut gelding with a record of 4080 miles in 67 finishes in 67 starts over 10 seasons. 13 of those were 100-mile completions; 6 of those were Tevis Cup finishes - 5 of them with Kevin. 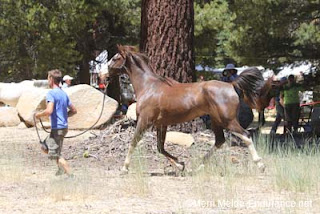 Far won the Haggin Cup last year with Jenni Smith riding. All of this after the gelding tore a front fetlock open as a 7-year-old, partially severing his extensor tendon and leaving his endurance career looking iffy. 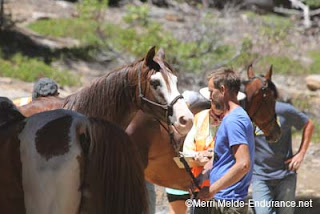 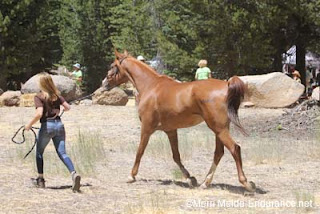 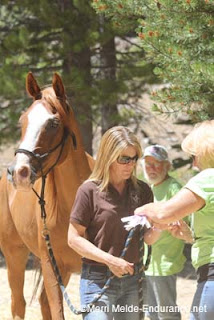 A number of horses in the ride would sport the logo IR4KM inked on their butts - "I Ride For Kevin Myers" - a beautiful tribute to this beautiful man that so many were carrying along in their heart over the weekend. 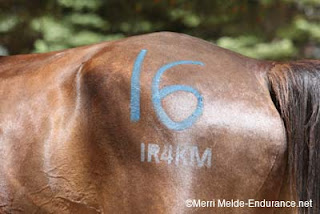 Crysta Turnage of Carson City, Nevada, would ride her 11-year-old gelding Dream Makker ("Digs") on his first 100-mile ride, in honor of Kevin, who gave the horse as a gift to Crysta back in 2010 after her horse Sinatra died of cancer. Crysta said weeks before the ride, "TEVIS. Sinatra was a *sound* horse. When we started in 2007 I knew if we didn't get behind on time, we would finish, and we did. Digs has never been a sound horse. His first ride was a RO-L pull and his record reflects that trend. I'm never confident he's going to finish a ride. And so I've been waffling, and debating.

Digs was a 4-year-old when Crysta got him, and the pair have come a long way, working through broken bones (Crysta) and inconsistent lamenesses (Digs), while performing in endurance, cattle sorting, and the Rosebowl Parade.

Colorado's Garrett and Lisa Ford were returning to ride The Fury and GE Cyclone. Kevin was a close friend of the Fords, and an integral part of Garrett's EasyCare company and family. Garrett, with 8 Tevis buckles, had ridden The Fury to 4 Top Ten Tevis finishes, winning in 2012, and winning the Haggin Cup in 2010. Fury's just a magnificent animal and he knows it!

Lisa, with 3 Tevis buckles, had ridden Cyclone to two Top Ten Tevis finishes, and one wrenching pull at the finish line.

Utah's Christoph Schork, the new 300 Win man, was riding GE Pistol Annie, a mare with a 25 for 25 record (16 of those wins) and a Tevis Cup finish with Christoph last year. 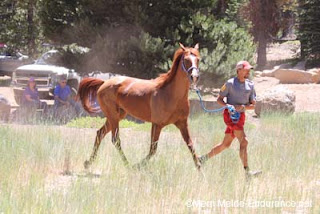 Florida's Heather and Jeremy Reynolds, responsible for 5 Tevis Cup wins and 3 Haggin Cup wins between the two of them, were returning on horses doing their first 100-mile rides, RB Code (Heather) and Danire (Jeremy). Heather would be escorting Elaine Lemieux on the Reynolds' mare CH Formal Affair, on Elaine and "Benz"'s first 100 mile ride. No better escort than a 5-Tevis-buckle/20,000 AERC miles/top international competitor companion than Heather!

Southern California Mother-son duo Karen and John Donley were back, hoping to finish together for the first time; Karen had finished 4 Tevis cups aboard Royal Patron, and John had finished one aboard My Mamselle - but never in the same race. It was John's first time in Tevis as a senior rider. 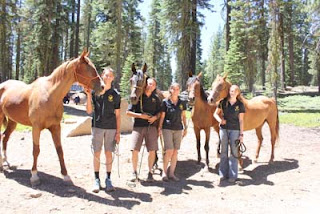 The Blakeley family, from Terrebonne, Oregon, returned hoping to finish all 4 together: mom Gabriela (4 finishes), dad Wasch (1 finish) and juniors Barrak (2 finishes, Haggin Cup 2014 with MCM Last Dance) and Sanoma (1 finish) - but never all at the same time. 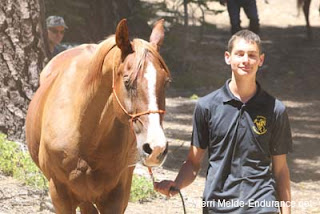 Posted by Endurance.Net at 8:02 AM