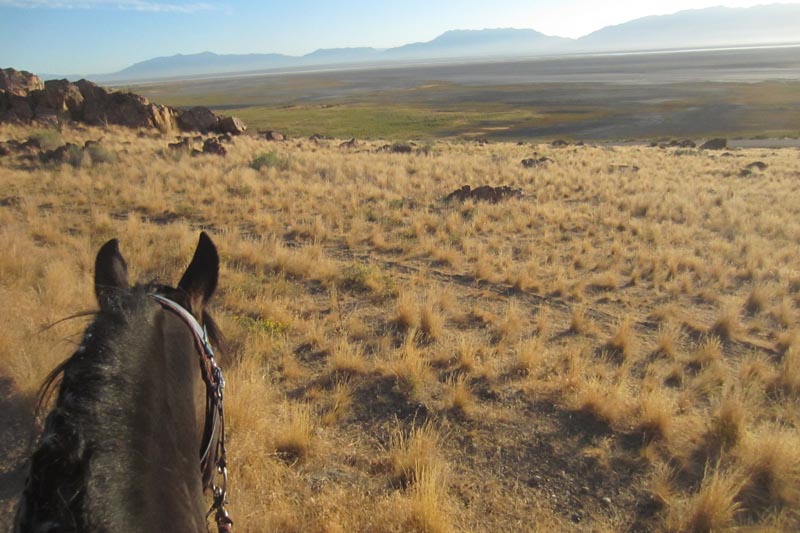 by Merri Melde-Endurance.net
Part 1 is here.

Start for the AERC National Championship 50 on September 8 was at 7 AM, just before sunrise. Dudley and I left the trailer and Saruq and Dezzie, looking for our riding partners, Simone Mauhl and Boogey. Fortunately Dudley doesn't mind leaving his stablemates; he's happy to go out with just about anybody. 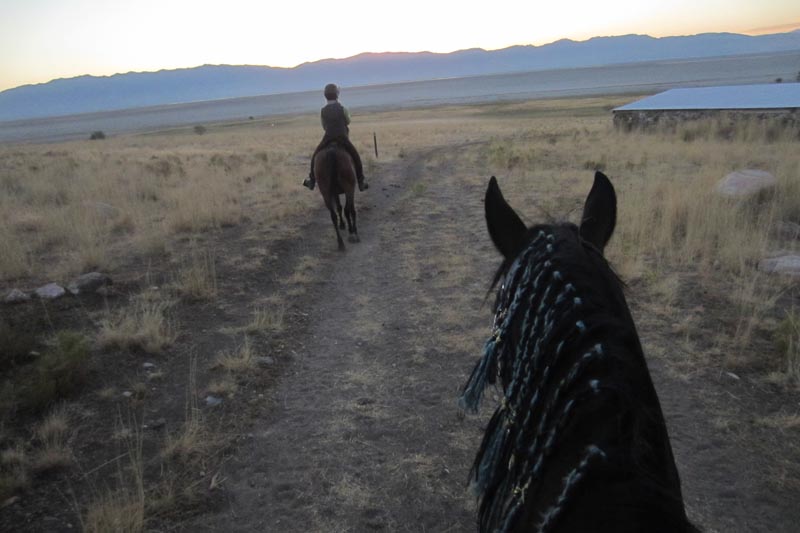 Simone and I rode around ridecamp waiting for the other 19 riders on the 50 to get going down the trail. We timed it just right so the rest of the field was past the ranch and around the corner on the single track trail as we started out - it was like we were going out for our own fun trail ride by ourselves along the lakeshore of this beautiful island! 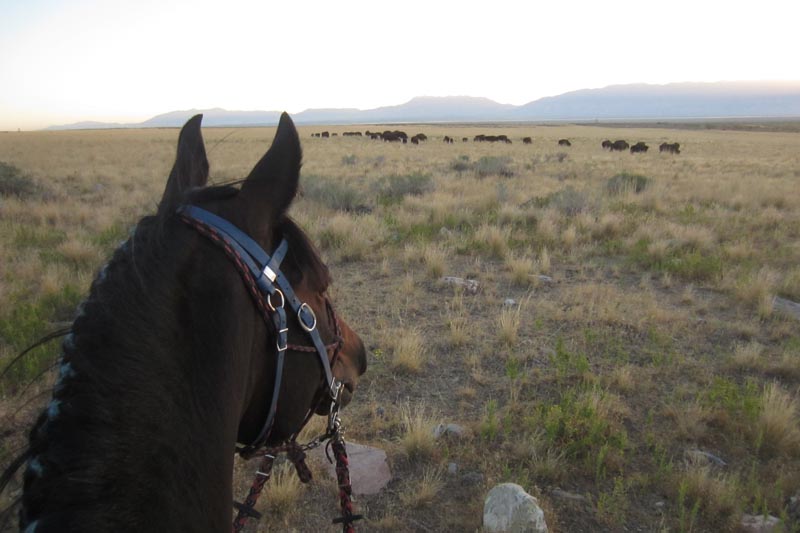 With buffalo! We saw our first herd just a mile or two out of camp. Neither horse paid any mind to them (the herd was 50 yards away); the two just trotted purposefully down the trail. Loop 1 (14 miles) took us straight north along the eastern edge of Antelope Island for some 12 miles, before we turned in toward the White Rock camping area on White Rock Bay. 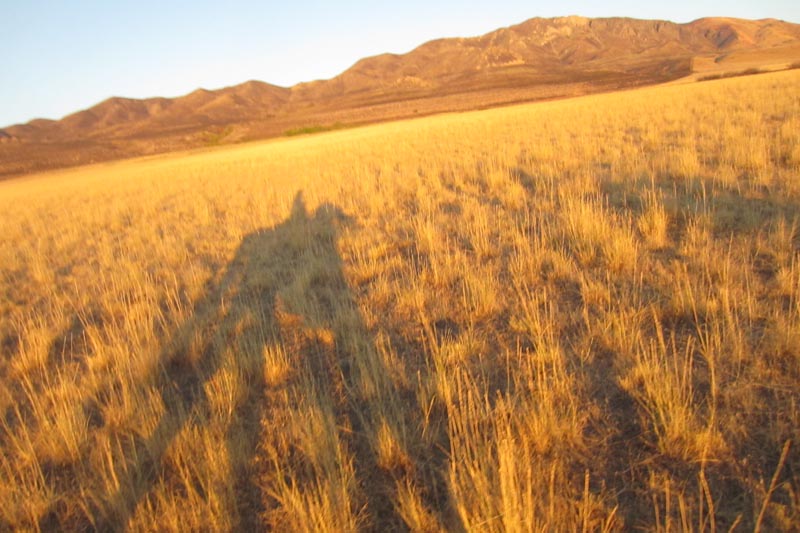 As the sun rose above the eastern Wasatch range in the pleasantly cool morning, it threw our long shadows across the buffalo grass toward the mountain spine of the island.

Trail markings were minimal for the rides - they weren't needed. No ribbons; just the occasional red pie plates at any critical junctions. "Just follow the trail you're on," said ride manager Jeff Stuart. "If you come to an intersection where you're supposed to turn, you'll see a red pie plate. Otherwise, stay on the trail."

That worked great, and we never had any questions - except at the chain link fence that we went through. I was in the lead for less than 10 yards when I realized there was perhaps just one set of horse hoof prints on the trail below Dudley's feet. I recalled some talk at the ride meeting about turning at the chain link fence (it pays to listen at these meetings!). I pulled out my handy dandy trail map, and indeed the map said to turn. Simone and I backtracked to the fence, and read the hoof prints turning left up the fence. It was Dudley who found the red pie plate on the ground! Probably a buffalo hoping for a piece of pie took it down. Since we were the last riders, we didn't have to hang it back up for anybody. 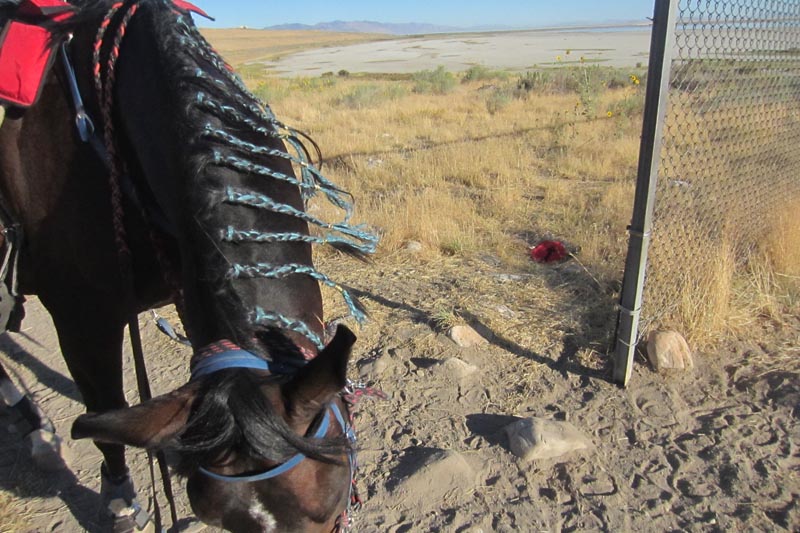 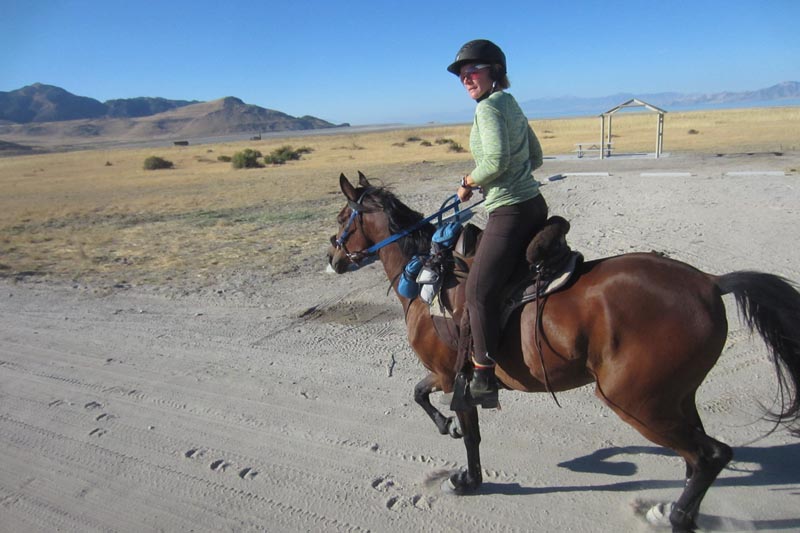 We continued up the trail, heading for White Rock Bay. This vet check was just a pulse and go, but we stopped for 10 minutes to let our boys have a good drink and a little bit of food. We could just see Connie and Sarah heading out ahead of us on the next loop, just about 15 minutes ahead of us. 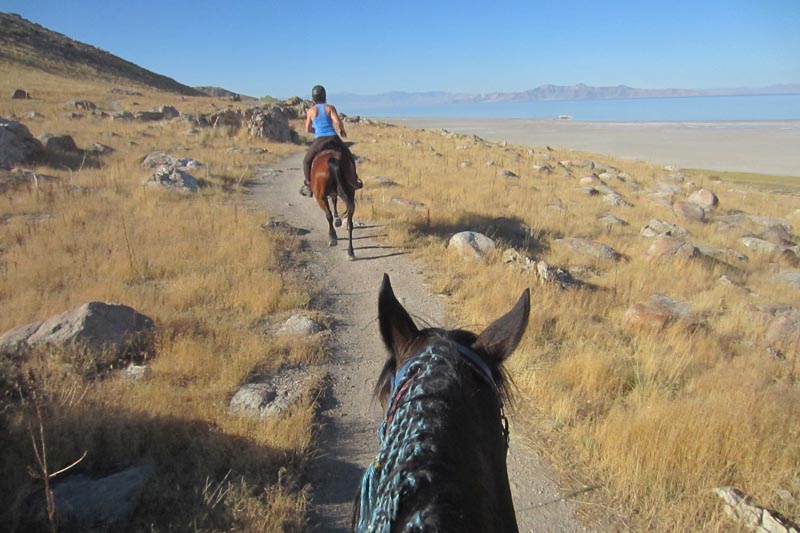 Next loop of of 22 miles took us on a climb onto the island's spine, where we could see the spread of the Great Salt Lake to the east and to the west below us. We followed the Beacon Knob trail, then the Elephant Head trail, dropping over a ridge and down to Split Rock Bay, journeying into and through the burned area of the island. The trail dropped to near the water before climbing a long stretch of rocky trail, "Rock A$$ Trail," Simone and I dubbed it, zigzagging back and forth, up and up, back in a loop to the Elephant Head trail. It had a special kind of beauty, this stark, rocky, blackened and charred moon-like landscape, contrasting with the deep blue of the lake in the distance, and the layered mauve and purple Lakeside and Newfoundland mountains further beyond to the west. Our horses greedily guzzled from a special water tank set out on trail some 4 miles from camp. It was getting low, so we sure hoped it would be filled by the time we came out for our final loop that passed around this way again, before heading back to camp! We shared the tank here with Dean Hoalst and Errol Fife, who were already on this last loop, and who would finish 5th and 6th, some 3 1/2 hours ahead of us. See what I mean about the great diversity of riding you can do at a National Championship ride - racing and poking and everything in between - and still have a blast? The vet check was welcome for our hungry horses, who hadn't been impressed with the burned vegetation on the trail (not even the brand new green sprouts of grass; they must have tasted poorly because Dudley eats everything!). Both horses never lifted their head from their feed buckets during the hour hold. Our final 22 mile loop took us back out on an abbreviated version of our previous loop in the hills. We found a good gap through a long string of moving buffalo, though there was one rambunctious, bucking buffalo baby romping around his mother that we gave a wide berth, moving off the trail to accommodate them. Dudley thought the Big Fat Hairy Cow baby was just plain silly. We Boogey-ed (get it?) back around to our favorite - refilled - water trough (thank you, ride management!!!) where Dudley was so thirsty, he almost plunged his entire nostrils under water while drinking. He drank so long and so deeply I got concerned enough to pull (didn't work) then yank him out for a breath!

After another 4 miles, back at the vet check, we didn't have a mandatory stop, but we swung back in to give our horses another drink, and to snack for 10 minutes. When we headed out for the 12 miles back to camp, we came upon Beth Buzis and TR Phantom, just as we approached a big water trough… with Big Fat Hairy Cows standing at it. The buffalo were drinking. We wanted to let our horses drink. We all eyeballed each other. I nudged Dudley forward. He gave the buffalo the stink eye. The buffalo blinked and started to back off. The three of us moved in and our horses drank, while the buffalo politely waited around for us to finish. They really are bizarre creatures - and rather huge - particularly the bulls. But still so soft and fuzzy and rather cute with their little brown eyeballs surrounded by a lot of big brown frizz and fiber. But we were ready to bolt away if need be! Leaving the water trough (the buffalo returned to finish drinking), we realized we had a whole, very close, migrating herd to get through on the trail down the fence line. Cars were stopped on both sides of the road to wait for the buffalo, and to watch and gawk at them (and us!). "Now what do we do!" I said to Simone and Beth. We could have gotten off trail temporarily and ridden down the other side of the fence - but there was no trail there, and there were buffalo there too. Impossible to go around the herd, because we'd have to slice through them first.

"Well, I'll let Dudley decide!" And Dudley just kept on walking forward on the trail, confidently throwing the stink eye about, and the cows and calves and bulls just moved on out of his way, and made way for all of us to ride on down the trail. The only somewhat disconcerting thing was the breathy fire-breathing gurgling rumbling coming from some of the buffalo throats. They sounded exactly like Khaleesi's dragons on Game of Thrones. If you don't watch Game of Thrones, this is what dragons sound like (around 0:56 to 1:02). Dragons and buffalo.

We left that herd behind and dropped onto the nice flat smooth sandy trail near the lake shore for our southward last 10 miles to the finish line. We did have a couple more buffalo obstacles to contend with - two bulls. One standing right on the trail that we politely swung far around, and one who was sitting down right near the trail. Even sitting, he was very large, and when he moved a hind leg to scratch his fuzzy itchy neck, that unnerved Dudley more than anything else had! One more vet-check-no-hold at 6 miles to the finish, and our horses felt great. But since this was the one stretch of trail that had the only grass that our horses had a taste for (long tall grass with seeds on the top), we walked or slow-trotted a lot of these last miles, our horses grabbing snacks the whole way. Dudley's main goal on an endurance ride, after all, is getting all A's on his gut sounds! And we crossed the finish line in just under 9 hours - 4 hours after the winner - accomplishing our goals of finishing with forward, healthy, sound horses in the AERC National Championship 50. Former head Tevis vet Dr Greg Fellers did the final check on Dudley, and the Dude finished with all A's - except for B's on 2 of his 4 gut quadrants, which he commenced to correct immediately back at the trailer. Dudley was pretty proud of himself.

Fellow southern Idaho rider Jill Haunold, riding Solara SS, was the winner of the 50 in a ride time of 4:43. Jill picked out this now-8-year-old Arabian mare off the Endurance.net classifieds. She didn't cut it in the show ring, and had changed owners 7 times in 7 years, but there was something about her that attracted Jill.

They didn't get along much for the first year or so, but they have figured it out in their 2 seasons of endurance together. This year Solara has completed 6 out of 7 rides (the lone pull a rider option), winning every one of them. They also received the AERCNC Best Condition award. This on top of it being Jill's birthday made for a pretty darn good day for them! Sarah Holloway was the only Junior rider and consequently scored lots of swag from several of the many generous National Championship sponsors, including Jen X pads, Riding Warehouse, Kerrits, and Crazy Legs Tights.

18 of the 21 starters completed the ride.

It was a great day!

Results photos and more at:
http://www.endurance.net/international/USA/2016AERCNC/