AERC NC Nugget: Where in the World is Carter Hounsel? 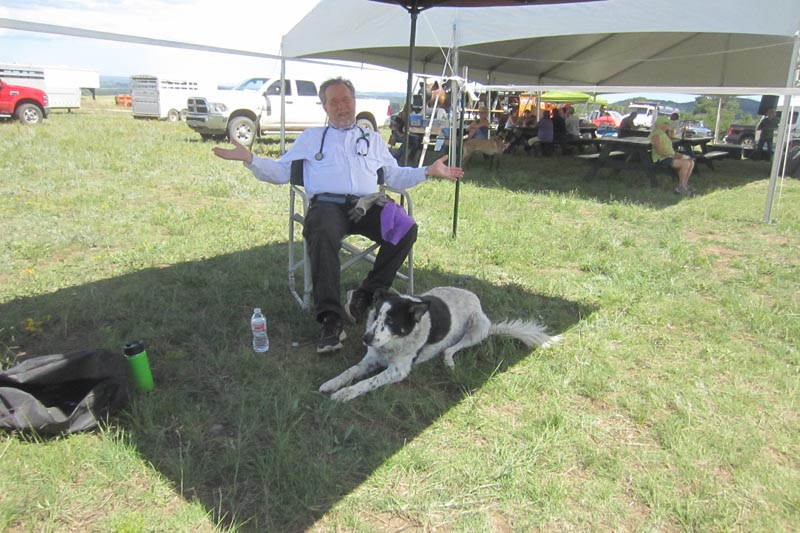 I arrive in La Veta on Wednesday before the AERC National Championships. Tennessee settles me in a rented house with the V.I.P.s, the non-local veterinarians.

Jim Baldwin, from Oklahoma, is already there and settled in. Head vet Tom Currier, from Montana, should arrive with Carter Hounsel, from Virginia, around 1 AM. They're flying into Denver at night, hooking up there and driving Tennessee's jeep, that she left there for them, to La Veta, a 3 hour drive.

7 AM Thursday morning, my phone wakes me. It's Tennessee. "Seen Carter?" I shuffle out of my bedroom, and I see a bleary-eyed Tom, who says Carter wasn't in Denver, so Tom drove down alone. And Carter hasn't miraculously turned up on his own this morning.

"Ah, the joys of being a ride manager," I comment.

She comes to the house in the midst of a whirlwind of ride prep activity, and says she's tracked him down. She talks the airlines into telling her that Carter is on a little plane from Denver to Alamosa, an hour away. "Can you possibly go get him?" she asks. "If you leave in 5 minutes, you should arrive right about the time he lands."

Sure, not a problem; one less unexpected time-consuming thing for a ride manager to do.

I take the pretty drive over La Veta Pass to Alamosa, arriving as the 6 passengers are getting their bags. No Carter. I talk to the nice Tiny Airline guy, who says, "Well, he *might* be on the next plane, which leaves Denver at noon."

I text Tennessee the news.

She finally tracks him down, and he is on the next flight, and, after spending some long hours in Alamosa, where there really is not much to do, except walk through J.C. Penneys, and try the one coffee shop that has rather weak Americanos, I pick up Carter and zip him back to La Veta. He's been awake for over 24 hours, but he's still quite cheerful and humor-ful. 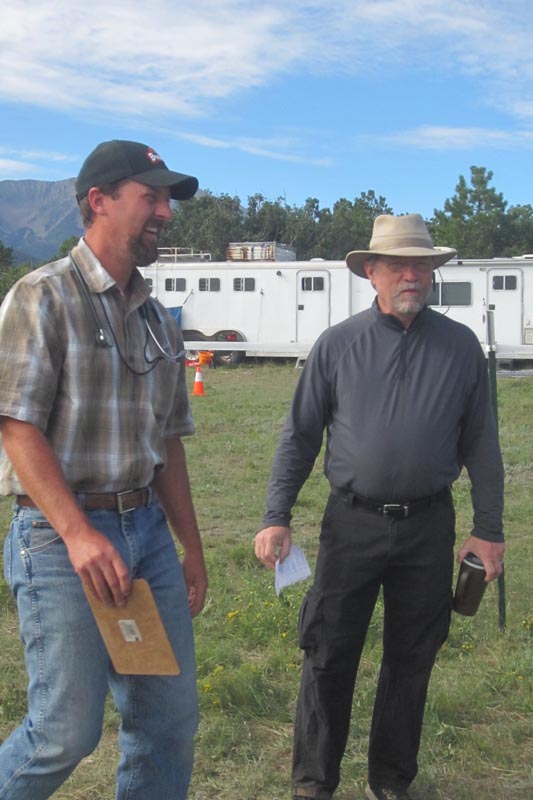 It's a good group of veterinarians for this AERC National Championship ride.

I was amazed Tom Currier even came to the ride - there's a fire raging right by his house. He evacuated all the animals and people from it and came down to vet this AERC NC ride. I'd be freaking out if that was my house. He shrugged. "Nothing I can do about it anyway." Tom's an endurance rider and endurance ride vet.

Jim Baldwin's been around forever. He's got a story for every occasion, from recently to forever ago. He originally worked on the racetrack, and he was one of Secretariat's vets when he was racing. One of his goals is to be the oldest vet at Tevis, and he thinks he accomplished that this year.

Many of you know Carter Hounsel as being from Texas, but now he's living in Virginia and is the emergency coordinator for 3 eastern states for the USDA. Carter's a good vet and a good teacher, and will explain anything you have questions about, if you want to learn.

Local vets Laura Blanton (and her assistant Vanilla the golden retriever - or, as I liked to refer to her as, Vanilla Pudding - who could imitate a flying squirrel and a sharpei) and Miranda Andress rounded out the excellent vet team for the Championships.